'She' is a singular, feminine, third-person pronoun. In this part, we will discuss its uses and grammatical rules. 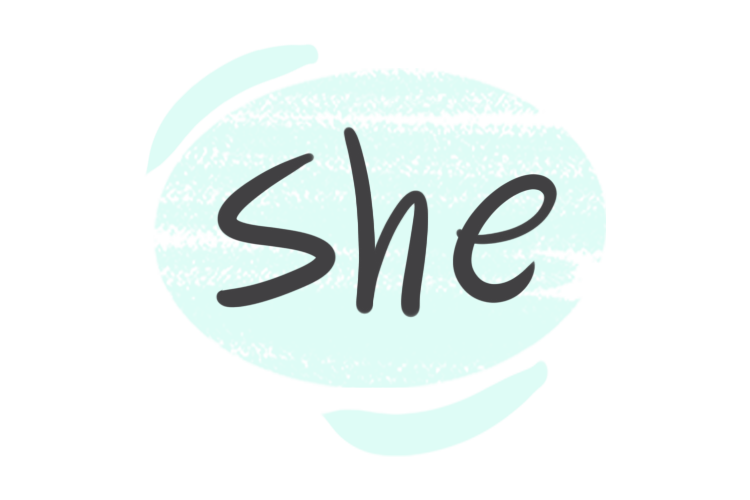 She is a singular, third-person subject pronoun, that generally refers to a female person or an animal. In this lesson, we will discuss when and how to use it.

'She' as a Subject Pronoun

This is Jane. is my baby sister.

helped me sort everything out.

What a cute puppy! Is a Bulldog?

This is Tessa. is my brother's Goldfish.

I know the goddess of victory. is Athena Nike.

who wants to work hard, should go there.

Now, this sentence is 'the person who wants to work hard, should go there.'

France is a beautiful country. is one of the best countries in the world.

is an awesome, reliable car.

Remember that in modern English, people tend to personify their belongings. For example, someone may regard their computer as a girl. Look:

I love my computer. is one of the bests.

She as a subject pronoun replaces the female subject. For example:

What a cute puppy! Is a Bulldog?

Sophie is there. is my friend.

'She' as a Prefix

She in combinations acts as a prefix before the names of animals and refers to the feminine gender of the animal. Take a look at the following examples:

She can be used as a noun referring to a female person or an animal. Take a look at the following example:

In Australian and New Zealand dialects, she is sometimes used instead of 'it' to generally refer to a situation that was just described. Take a look at the following example:

This sanction is putting pressure. But will be alright.

'She' refers to 'sanction.'

In West-Indian dialect, she is used as the object pronoun 'her.' For example:

In this lesson, we will learn more about the first person pronoun 'I' and explain its uses and grammatical rules.

'You' is the second person pronoun. Here, we will discuss the functions and grammatical rules of this useful pronoun.

'He' is a third-person singular pronoun. In this part, we will go through its uses and grammatical rules in English grammar.

'It' is a third-person singular pronoun. Here, we will take a close look at its functions and grammatical rules in the English language.

'We' is the first person plural pronoun. In this part, we will go through its uses and grammatical rules in the English grammar.

'They' is a third person plural pronoun. In this part, we will go through its uses and grammatical rules in the English grammar.