'Other' is commonly used in the English language and learners may confuse it with the word 'another.' In this lesson, we will learn more about 'other.' 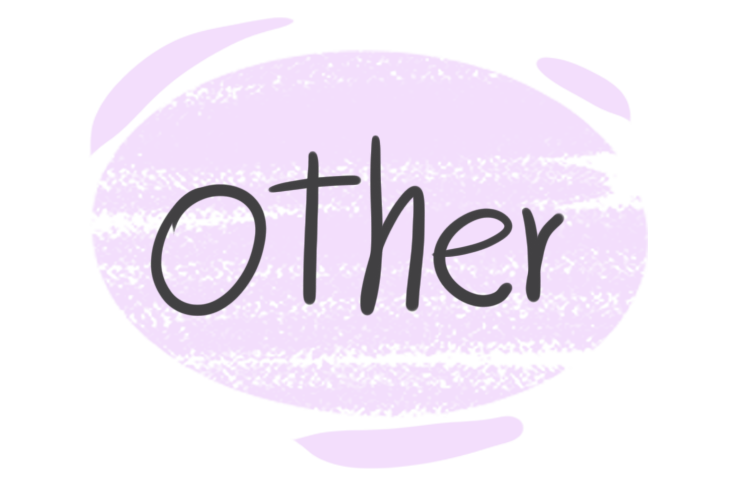 'Other' is used widely in the English language. In this lesson, we have covered all its uses and its positions in a sentence.

'Other' as a determiner stands before a singular or a plural noun and has different functions such as referring to a noun that has not been mentioned, referring to one of two things, etc. To know more, take a look:

Do you have things to say?

books will be bought.

They believe God exists but the group doesn't.

In parts of the city, there is a celebration.

On the side, my father is standing.

She started waling to the way.

The speaker probably has two sons.

The student is not happy yet.

She is smarter than all the students.

All the books were mine.

'Other' as a determiner is used before nouns or noun phrases to modify them; as a result, 'other' and the modified noun can be the subject or the object of the sentence.
As we said earlier, 'other' can be used before countable or uncountable nouns. For example:

On the side, my father is standing.

In parts of the city, there is a celebration.

'Other' as a pronoun is used to replace a noun it refers to. The plural form of 'other' is 'others. and it has different meanings.

This problem and the will be solved.

These problem and the will be solved.

I was over the clouds while the was down in the dumps.

This is the last book. All the have been sold.

I was over the clouds while were down in the dumps.

I went from one side of the town to the .

I am on this side while my father is standing on the .

'Other' as a pronoun replaces a singular noun while 'others' replaces a plural noun. Remember that both of them can act as a subject, an object, a subject complement, etc.

I am on this side while my father is standing on the .

This is the last book. All the have been sold.

'others' is the subject.

'Neither' has many functions in the English grammar such as being a pronoun. In this lesson, we will discover all about this commonly used word.

The word 'none' has two functions in the Englsih grammar including being an adverb and indefinite Pronoun. In this lesson, we will discover all about this word.

'Enough' is an English word that you may have heard several times. It has three functions which we will cover in this lesson.

Each of us has heard the word 'each' but not many of us know its uses. If you want to learn its uses, follow this lesson.

'Few' can modify a noun, replace it, or even be the noun. It has three functions which we will discuss in this lesson.

The word 'many' is used in "many" situations and contexts. In this lesson, we will discover all the details about this word.