'As' is a commonly-used preposition but that is not its only function. It can also be an adverb or a conjunction. In this lesson, we will learn all about it. 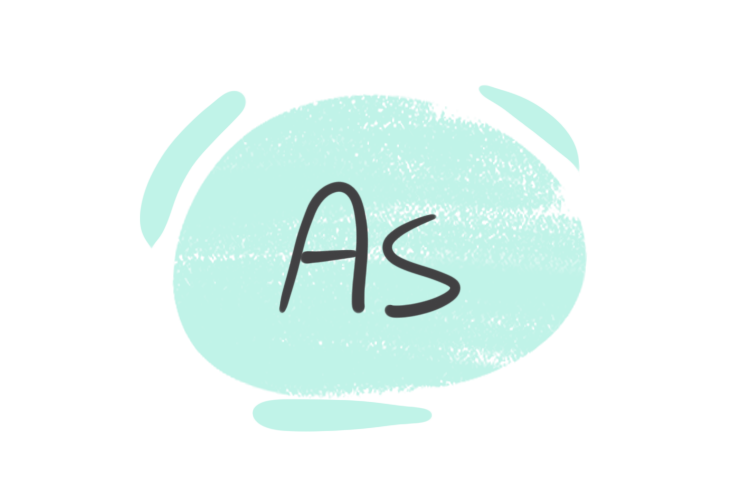 As is a short word but it can be a preposition, a conjunction, or an adverb. It is used in different contexts in English grammar.

1. The Preposition 'As', Functions

As is a preposition and can be used to show purpose, function, characteristics, etc. Take a look:

As is used to show the purpose of something for doing something. Look:

It is used a document for this issue.

'As' shows the purpose of the document.

As is used to show the function of something or responsibility of someone. Like:

I work a translator.

You can use this place a study room.

1.3 'As' Shows the Characteristic

As is used to show the characteristic or the quality of something. Look:

This book is described a tragedy.

This is a film knows a sitcom.

As show similarity between two nouns and has a similar meaning to 'like'.

This pot is thick a piece of wood.

He shouts at me (just) his father.

As is used instead of for instance, for example:

I have some pain relievers, Ibuprofen or Naproxen.

If as is a preposition, it comes before nouns or pronouns in a sentence. For example:

He came to the costume party a batman.

This film is known a sitcom.

2. The Conjunction 'As', Functions

As can be a conjunction and express reasons, simultaneity, etc. Take a look:

As is used to express the reason or cause. So, it has a similar meaning to 'because, since.'

it was rainy, I stayed at home.

You can go out it is sunny.

As is used to express simultaneity. That is, it indicates two actions are performed at the same time. So, it has a similar meaning to 'while.' For example:

My dad saw me I was walking.

he grows up, he becomes plumper.

As is used to compare something to something else and it indicates the way something is done or happens. It has a similar meaning to 'just like, just the way.' For example:

You can do you wish.

I cleaned the garden my mom wished.

As is used to show the contrast between two clauses and it has a similar meaning to 'although, though, even though.' Note that there is an inversion in this case. Like:

Happy he is, he is still shouting.

Beautifully he sings, he doesn't know anything about solfege.

As in the structure so/such + adjective + as + infinitive is used to show the result or outcome.

He was so old to die.

As is a conjunction and can be used instead of 'that' in an informal context. Look:

I don't know you declined that.

If as is a conjunction, it heads an adverbial clause that acts as an adverb. That is, it adds more information to the verb, the adjective, or another adverb. For example:

I cleaned the garden my mom wished.

'As my mom wished' is an adverbial clause and describes the verb 'cleaning.'

As is used before adjectives or other adverbs to mean 'to the same degree.' For example:

usual, I am hungry.

I love him a lot but I don't love you much.

'Much' is an adverb.

The structure as + adjective/ adverb + as is used when comparing two things that are the same or equal in the same way. Look:

You should walk slowly a baby.

The first 'as' is an adverb and the second one is a preposition.

They are far my father.

If as is an adverb, it comes before adjectives or other adverbs. For example:

You should walk slowly a baby.

'As' comes before the adverb 'slowly.'

usual, I am hungry.

'Of' is one of the most important prepositions in English grammar that has a large number of functions. In this lesson, we will learn it in detail.

'To' is a preposition. However, that is not its only function. In this lesson, we will discover this word and its uses in detail.

'With' is a commonly used preposition. We use it in many different contexts. In this lesson, we will discover all about it.

'About' is a preposition but it can also be used as an adverb. In this lesson, we will discover al about this preposition.

'From' is a preposition that can be used in many contexts. In this lesson, we will discuss this preposition in detail.

'By' is a preposition but it also functions as an adverb. In this lesson, we will discover its uses and rules.