Since it is a common question. Let us go through it. 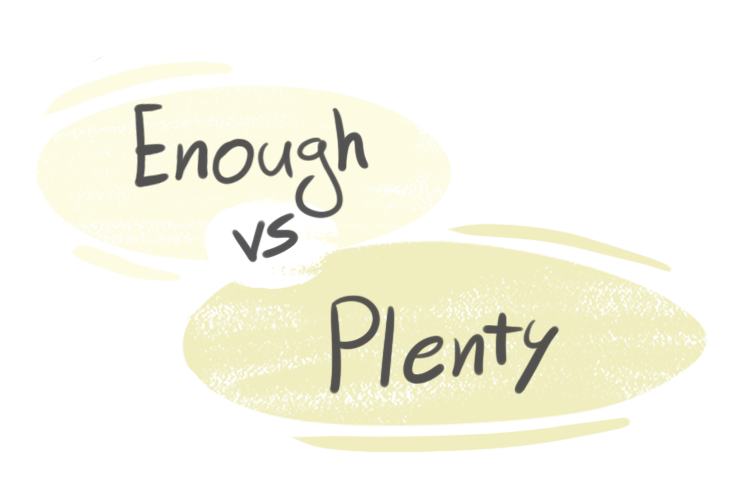 What Are Their Differences?

We use 'plenty' and 'enough' a lot in English. So, it is important to know their meanings and functions. Mainly 'enough' means as much as wanted, while 'plenty' means enough or more than enough.
These two words are a little bit different in their grammatical functions.

What Enough and Plenty Mean

We have food for all of us.

I think we struggled over this problem.

means enough or more than enough. So, it can refer to a larger amount compared with 'enough'.

We've got of time let's think then act.

Students have opportunities in this school.

comes after another adverb or an adjective, or even after verbs as an adverb. As a pronoun, it is used without a noun directly after it. 'Enough' as a determiner comes before a noun whether plural countable or uncountable.

The runner was fast to win the race. → adverb

is given to the court. Judges can decide easily. → pronoun

Here in this example 'enough' is used as a pronoun and it is obvious that we mean 'enough evidence'.

She has bottles to run the party. → determiner

We have money to buy the house.

There is hardly time for them to get to know each other. The wedding is next Saturday.

As an adverb is used before an adjective. As a pronoun it means more than enough or enough. As you know, pronouns cannot be followed by a noun directly. However it might be rare for you, 'plenty' can be used as an uncountable noun, too.

They lived on a land of back then. → noun

My uncle was angry with my cousin. → adverb

Plenty of and Enough of

'Plenty' can be followed by [of + noun]. The point is that 'enough' can be added to [of + determiner + noun]. Remember you can use enough as a determiner before nouns with no determiners or before pronouns.

Don’t go to the groceries we have jam.

They have of houses, they are really rich.

She has taken up his time.

Let's go home. I have seen them.

As it was mentioned earlier, they are really close to each other based on their meanings. Actually, in some cases, they can mean exactly the same.

This a huge progress for you.

This progress is huge for you.

of their plans rely on the company's profit. → pronoun

I have had of this pointless conversation. → pronoun

She has made excuses for her mistake. → determiner

In the time of many wasted the sources. → noun

We have spare rooms for the guests.

It will be ok if more guests are added up to us, we have of rooms in here.

Do not go out to buy stuff. We have to cook dinner.

Together or both? Where do we use them? Do they mean differently? These are the questions asked commonly by English learners. Let’s take a look at them.

This is an interesting grammar in the English language. They are easy to understand with little notice.

Enough vs. a lot of

If you want to know the difference between ‘enough’ and ‘a lot of’ follow the article.

Little vs. a little

In fact, these two words are too important. Therefore, they are confused a lot by the English learners.

As you might have seen 'little and 'few' in English contexts a lot. let's take a look at them.