"Both" vs. "Both of" in the English Grammar 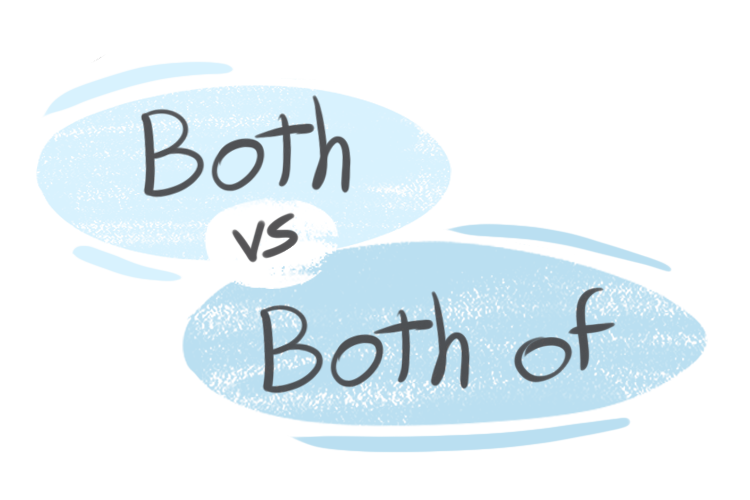 'Both' and 'both of' are used commonly in the English language. They are similar in many ways. Actually, these two words mean the same, but sometimes they are used in different positions.

We are allowed to use 'both' after pronouns, but we cannot do the same for 'both of'.

us are sorry about what we did earlier.

them were trying hard to beat the opponent.

When we are referring to two options which are of the same parts of speech we must use 'both' followed by 'and' not 'both of'. Remember in this case both can be followed by a singular noun linked to another singular noun.

their wedding their honey moon was in Montreal.

Both, Both (determiner), Both of

After 'both' we are supposed to use plural countable nouns. Remember, We can not use a singular noun after it unless it is followed by a determiner which is discussed below.

cars got dirty because they neglected to keep them polished.

The theories of scientists were unacceptable.

my best friend my sister are putting money to invest on some buildings.

the rabbit the mouse are soft and chubby.

'Both of' is used before noun phrases we mean before (determiner + noun). But the most important thing to know is that we can not use singular nouns in this case and after 'of'.

his shoes were wet because of the rainy weather.

the students went on the scene to play their part.

You and Me Both

As rare as it looks it is normally used in spoken English. The expression 'you and me both' is used to say something is true about you and the person talking to you. Look at the examples to be clarified.

know he is right.

We can use twoadjectives after 'both' and one or more adjective after 'as well as' to say that the adjectives all are true about the person or thing. Let us take a look at some examples to be clear. Remember, we can use both before adjectives on its own. The whole rule is used for 'both' not 'both of'.

Katherine is rich and smart.

Billie is kind and famous talented.

In Combination with Determiners

'Both' and 'both of', refer to two people or things in a group of two, at the same time.

knights were fighting for their country.

them were covered in mud because of the accident.

Using 'The' before Both and Both of

Using 'the' before both and both of is not correct because 'both' and 'both of' somehow play the role of the definite article. However, in spoken English, sometimes to put emphasis we can use 'the' before 'both' or 'both of'.

both of you are on detention.

both giraffes were trying to get the ice-cream from the little child.

are going on a date?

have to clean our rooms, now.

Together or both? Where do we use them? Do they mean differently? These are the questions asked commonly by English learners. Let’s take a look at them.

This is an interesting grammar in the English language. They are easy to understand with little notice.

Since it is a common question. Let us go through it.