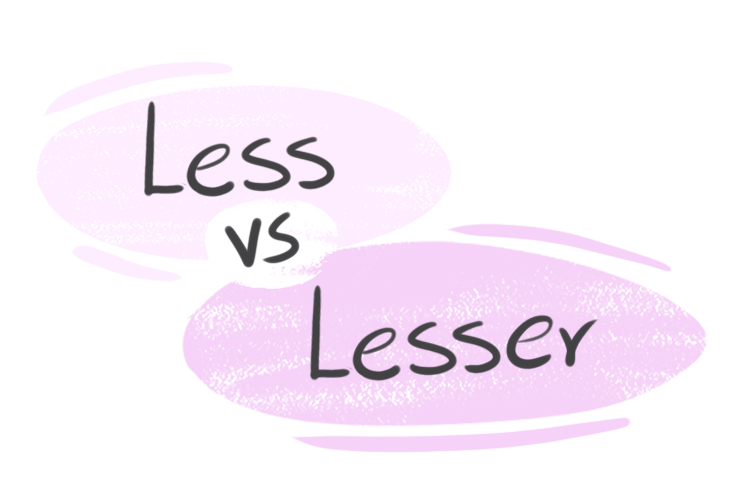 'Less' shows reduction, while 'lesser' is just an adjective used before nouns to mean, something is not as great or important in size or importance as other things.

As you know, determiners are used before nouns, using different kinds of nouns after determiners rely on the determiner. For example, 'less' is followed by singular uncountable nouns, However using a plural countable noun after it is considered common in daily English. Pronouns are used without any nouns immediately afterward. Adverbs are used to modify verbs adjectives or other adverbs, 'less' as an adverb is used after the verb and before adjectives and adverbs. Suffixes are added to the end of a term to give new meaning or related new meaning to it. 'Less' is added to adjectives to indicate the lack of a particular adjective.

of the cereal was left in the bowl. → pronoun

He turned out to be slow after practicing that hard. → adverb

We saw a man beside the street looking for food in the trash.

Lesser as an adjective is used only before nouns to tell they are at the lower degree or level. In other words, it is used to tell something or someone is not as important as the others.

They are people who are not able to effort their life.

He belonged the - arts which became famous after his death. → compound adjective

What Less and Lesser Mean

As it was mentioned earlier, they differ in their meanings.

shows a reduction in the amount or number of something.

We have to get stressed . → pronoun

They are giving money. → determiner

means not as great or important as something else.

This is a land which does not worth buying. → adjective

A student would quit trying on this subject. → adjective

Use butter to melt the chocolate unless you ruin the taste.

meat is required these days, because people started to be vegetarian.

is used before any noun as an adjective whether the noun is countable, uncountable, singular, or plural.

He was a teacher; I was confused after his teaching.

The Lesser of Two Evils or the Lesser Evil

If you are forced to choose between two bad choices and one of them is the worst while the other is a little bit better you use "the lesser of the two evils" or "the lesser evil". It means the one that has been chosen is a better option.

Spending the night on the island and not being killed by the sharks was .

She should marry an old man because it was .

It is said that sometimes people use 'lesser' as a double comparative in the same meaning as 'less', but keep in mind that it is technically incorrect and we use 'less' instead. Keep in mind that this use is too informal.

The car worth than the house.

He has unforeseen problems than I have.

Their Position in Interact with Nouns

'Lesser' as an adjective and 'less' as a determiner is used before nouns.

She is a student of grades we do not know her.

Using ice in the cocktail makes it taste bad.

'Less' and 'little' are truly close to each other. There is just a delicate difference between them.

Both of the two words are quantifiers and they are misused a lot but if you know the meanings. It would make no confusion for you.

Since they are similar in their meanings. They cause problems for beginners because it is difficult for new learners to choose when and where to use them.

'Less' and 'least' are used a lot in English so it is important to know their differences. Let's dive right into it.