"Much" vs. "More" in the English Grammar 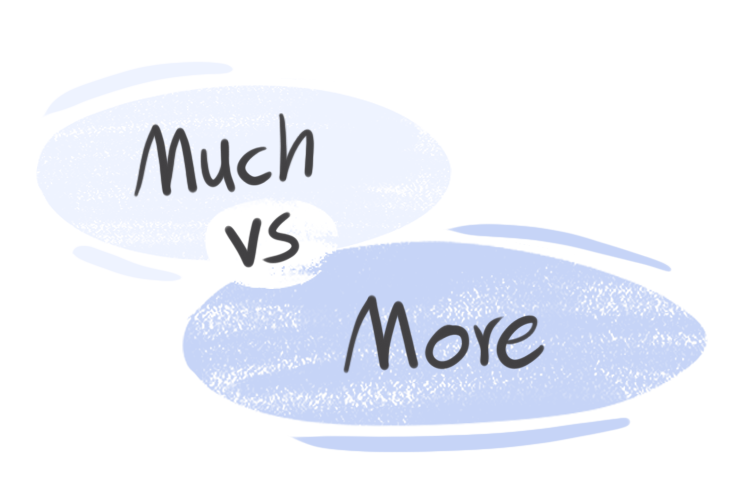 refers to a large quantity. Quantities can refer to numbers or amounts, let us say the term 'much' refers to amounts not numbers.

He did not left money after his death.

He ate cake that made him feel nauseous.

refers to a larger quantity in comparison with other things. 'More' is the comparative form of the terms 'much' and 'many' so as a result, more can refer to both numbers and amounts. In general, 'more' refers to a greater quantity than before or than average, or than something else.

We will need candles, as it gets darker.

I want to read books; I only live once.

is followed by a singular uncountable noun. As it is mentioned you cannot use a singular countable noun after the term 'much'. As a result, the verb that is used with 'much' must be singular.

If you are overweight, you can lose weight by drinking water.

There is not space between us in the locked closet.

She added offensive words to the letter to her rapist.

There is a structure made by the word 'more'. It means that some tasks are about to be done besides those that have been done earlier. The structure is [nember+ 'more'+ infinitive with to]. This is used to name tasks or things you have to do.

There is . Do not try to ditch me.

We have , fortunately there is no more.

Here is the thing, if the second part of the comparison is mentioned more have to be followed by the term than.

My mother is experienced I am.

Alex is more important to me than Hanna. I mean, hello! he is my brother.

Whenever two different things or situations change or increase depending on each other, we can use the structure [the more... the more...] and both sides are syntactically alike.
A comma separates the two parts of the sentence.

it got darker, I got terrified.

you are stressed, you get unconcentrated.

This car uses fuel than the previous one. → determiner

I do not need , just give me two bucks. → pronoun

It is getting interesting, who was he talking to, again? → adverb

both refer to a quantity. It means they can refer to amounts or numbers, as a result, they are called quantifiers.

I felt stressed as he got close to me.

I found peace after moving in this new place.

We have had fun back then.

More of and Much of

'More' and 'much' are followed by the preposition 'of' when a noun phrase [determiner + noun] or a pronoun follows them. So, the structure is [ much of/more of + noun phrase/pronoun]. Remember, the objective pronoun after much should be 'it'. We mean the pronoun has to be singular.

us are getting the involved in this horrible situation.

The phrase 'much of a' is used to say that someone or something is a good example of a concept. To make this phrase negative, the term not must be added 'before' 'much' to show that someone or something is not a good example of a particular concept. As the article requires the term after the article, must be a singular noun. Check out the examples to be clarified.

He is doctor he couldn't inject the little boy.

Oh my God, meeting him on her wedding day is problem.

'Less' and 'least' are used a lot in English so it is important to know their differences.

Much vs. a Lot