'Who' is commonly known as a question word used to acquire information about a person. In this lesson, we will learn everything about this word. 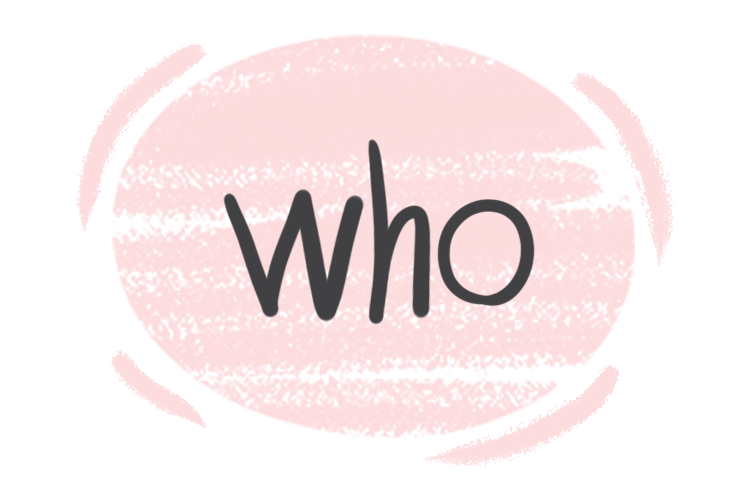 Who is one of the WH-words categories. Three functions of who are covered in this lesson:

1. 'Who' as an Interrogative Pronoun

Who as an interrogative pronoun is used to ask about the subject, the subject complement, the object, or the object of a preposition. Remember that who is only used to refer to people. Take a look:

do you work for?

To are you sending the letter?

1. Who is used to refer to subjects or objects, but whom refers only to objects. For example:

did you invite to the party?

'Who' refers to the object.

did you invite to the party?

2. In everyday English, it is more natural to use who instead of whom at the beginning of a question. The preposition, then, comes at the end of the sentence. Therefore, it is considered formal to use prepositions before whom. For example:

are you sending the letter to?

To it may concern.

Who as an interrogative pronoun comes at the beginning of the sentence. An inversion is needed when 'who' asks about the subject complement, the object, or the object of a preposition.

There are two steps to make an inversion:
1. The subject complement is omitted and who comes at the beginning of the interrogative sentence.
2. The to-be verb and the subject are inverted.

1. The subjects 'I' and 'we' are replaced with 'you' in interrogative sentences.
2. If there is a main verb in a sentence, a semi-auxiliary or an auxiliary verb is needed to make an interrogation.

do you work for?

To are you sending this letter?

Who can be used alone to show surprise or other emotions, like:

2. 'Who' as a Relative Pronoun

I don't know the man is over there.

Who as a relative pronoun always heads an adjective clause. Look at this example:

I don’t know the man is over there.

'Who' always heads the adjective clause.

That as a relative pronoun can replace who but a comma is never used before 'that.' Who can take a comma if the adjective clause it introduces, is non-essential. Like:

I saw the man, can sing songs.

'Who can sing songs' is a non-essential adjective clause.

This is the man sing songs.

'Who sings songs' is an essential adjective clause.

3. 'Who' as a Nominal Relative Pronoun

Who as a nominal relative pronoun is used to introduce a relative clause. The relative clause is nominal because it acts as subjects or objects for the independent clause. Look at these examples:

I don't know is over there.

'Who is over there' is the object of 'know.'

'Who to call' is the subject.

I don't know is over there.

'Who called' is a nominal relative clause.

'Why' is a WH word, which is mainly used in question form. In this lesson, we will learn everything about this word.

'How' is mainly known as an interrogative adverb to find out the way an action happens. But there is more to learn about this word. Click here to learn!

'What' is commonly known as a question word, but there is more depth to this word than you are aware. Click here t learn all about it!

'Whose' is related to possession and association, used to ask which person owns or is responsible. In this lesson, we will learn its uses and structures.

'Which' is a WH word, mainly used in question form. In this lesson, we will learn everything about this word.

'Whom' is a WH-word, which is mostly used in question form. In this lesson, we will learn everything about this word.