In this lesson, we will learn more about 'that,' which is a demonstrative pronoun that can replace a noun and become the subject or the object of a sentence. 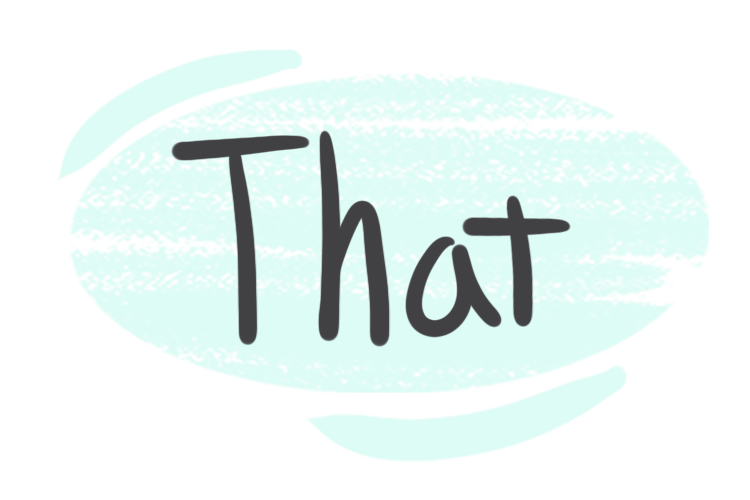 That is one of the commonly used words in English. That is singular and is used for people or things. In this lesson, we will discuss when and how to use it.

1. 'That' as a Demonstrative Determiner

That as a demonstrative determiner is used to show a far person/thing or a previously-mentioned thing or person. That is also introductory and can be used in combinations. It has other functions as well. Take a look:

I saw car yesterday. It is Jacob's.

'That car' is the object.

car over there is mine.

'That car' is the subject.

There is a boy in our neighborhood. I hate annoying boy.

'That annoying boy' refers to 'a boy.'

I should study harder. idea would help me with my career.

'That idea' refers to 'I should study harder.'

'That person' is selected among a group of people.

I want book. The one with a green cover.

He was my best friend at time.

morning, I was so angry.

Did you read book I had sent you?

That as a demonstrative pronoun is used before nouns or noun phrases. For example:

I saw car yesterday. It is Jacob's.

beautiful baby is mine.

'Beautiful baby' is a noun phrase.

2. 'That' as a Demonstrative Pronoun

That as a demonstrative pronoun can be the subject or the object of a sentence.

That as a demonstrative pronoun is mainly used to refer to a far thing or person. To learn more functions of that, have a look:

Here, 'that' means that the ring is not near the speaker.

'That' is the object.

B : Is the reason you want to buy the same book?

My research interest aligns with of yours.

His look was of a young baby.

A : I think you should go to the doctor.

Another example shows a reaction to something mentioned before:

This sentence is used on the phone.

That as a demonstrative pronoun replaces a noun and becomes the subject or the object of a sentence. For example:

'That' is a subject and replaces the noun phrase 'this film.'

3. 'That' as a Relative Pronoun

'That looks expensive' is an adjective for 'a new house.'

This is the man you were talking to.

'That you were talking to' is an adjective for 'the man.'

That as a relative pronoun is used after the noun or noun phrase it describes. For example:

This is the man you were talking to.

I know the man is over there.

'That' cannot be left out because it is the subject of the relative clause.

I know the man you were looking for.

'That' can be left out because it is the object of the relative clause.

4. 'That' as a Nominal Relative Pronoun

Do you wonder I love you?

That as a nominal relative pronoun always comes at the beginning of the independent clause. For example:

I know you were looking for me.

'That' introduces a nominal relative clause.

That can be the adverb and precedes an adjective or another adverb. We can use 'that' as a moderator that is an adverb that is neither an intensifier nor a mitigator.

English is not difficult.

Her clothes are not all beautiful.

Do you miss her much?

I think he is stupid.

The book was big.

That as an adverb is used before other adjectives or adverbs. For example:

This book is big.

'That' is before the adverb 'fast.'

In this lesson, we will learn more about 'Us' which is the first-person plural pronoun, and the object form of 'we.'

'Them' is a third-person plural pronoun. In this part, we will go through its uses and grammatical rules in English grammar.

'This' is a word that shows something or someone. In this part, we will go through its uses and grammatical rules in English grammar.

'These' is the plural form of 'this.' In this part, we will go through its uses and grammatical rules in English grammar.

'Those' is a plural demonstrative pronoun. In this part, we will go through its uses and grammatical rules in English grammar.

'There' is a pronoun used as the subject of a sentence. In this part, we will go through its uses and grammatical rules in English grammar.