Prepositions allow us to talk about the relationship between two words in a sentence. Here, we will discuss the different prepositions of place in English. 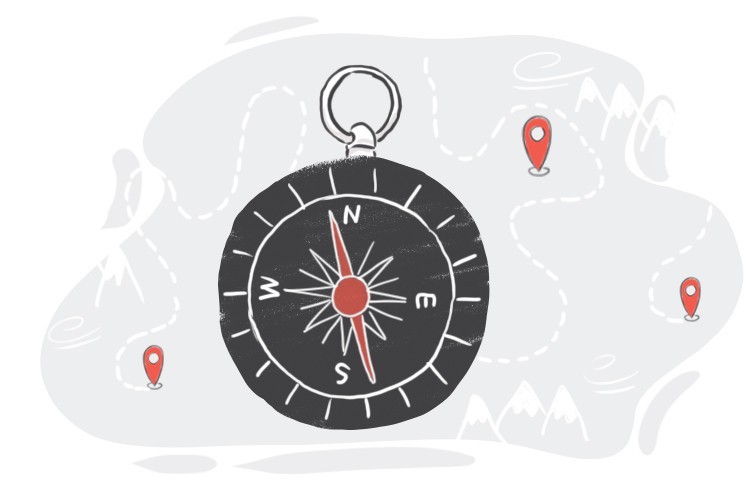 What Are Prepositions of Place?

Prepositions of place help us talk about a specific location or position. In other words, we can use them to say where someone or something is. Read the article to get to know them.

Types of Prepositions of Place

According to their meaning, we can classify the prepositions of place into five groups:

These prepositions (on, at, in) are the most common prepositions of place in English. Each of them is used to show the location or position of something or someone seen as a point.

'At' is used to talk about a specific place or location. Some examples of its uses can be:

The university is 98 Roosevelt Street.

I was a birthday party.

See you the dentist's office.

I had a meeting with Mary's teacher school.

We use 'in' to talk about a specific area within a general space. This preposition is mostly used for:

The baby is sleeping her room.

locations in relation to a larger area

I will wait for you the car.

We can use both 'in' and 'at' for locations in a building. When we use 'in' we are saying that the location is inside the enclosed space of the building. But 'at' does not show the specific location. For example:

We should know that 'on' has two different meanings. When 'on' is used to show the location, it is often used for:

The boss's office is the 7th floor.

Please hang the painting the wall behind the sofa.

We enjoy going on a trip the train.

They spent the weekend sailing the rolling sea.

She was staring at the ring her finger.

As you might have guessed, we use 'at' to show a general location. Using the preposition 'on' shows a more specific location. Look at these two examples:

She may be at a shop on the beach or in the water.

She is actually on the sand.

'Above' is used to show that something is much higher than another thing. For example:

The birds were flying the clouds. 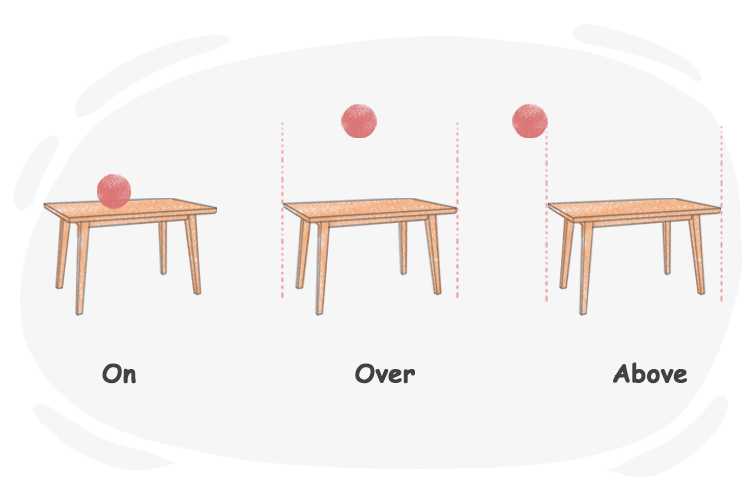 Mom kept the umbrella our heads.

Her mother put a blanket her.

As we mentioned before, on has two meanings. When ‘on’ is used as a horizontal proposition, it shows physical contact with a vertical surface.

The candles are the table.

'Under' is a preposition that shows a position below something.

There are no monsters the bed, Johnny! 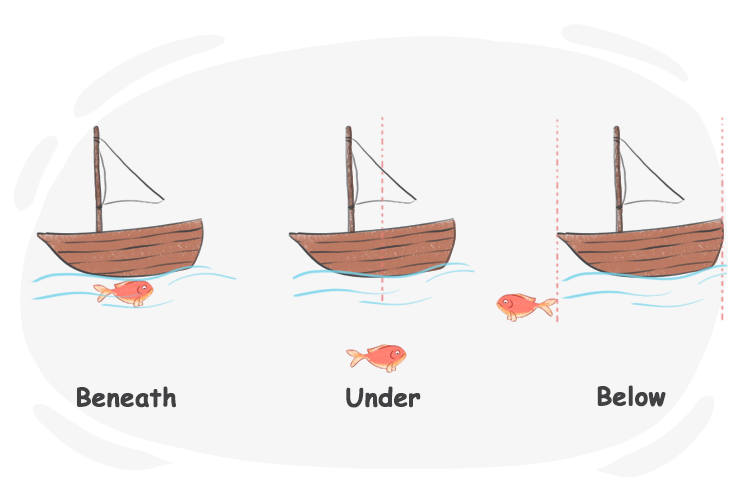 We use 'beneath' to show a lower level. For example:

The shop is right the apartment.

'Below', as a preposition of place means at a lower level or position than something or someone.

Just the surface of the water, the crocodile hid.

In the list below you can see some other examples of Prepositions used to show Horizontal Position:

This type of preposition is also called the preposition of proximity. They show how close someone or something is to another person or thing. 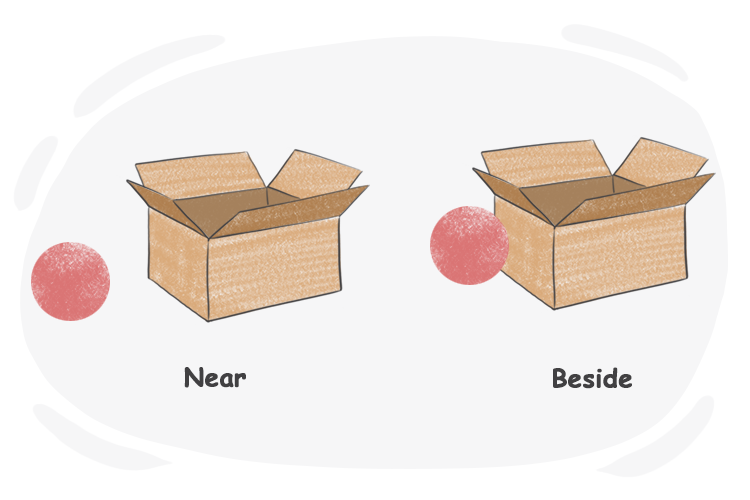 using the preposition 'near' to talk about distance

'Near' is used to show a short distance from something or someone else. For example:

The parking lot is the shopping center.

If you swim the bottom, you can see the coral reefs.

Beside, Next to, and By

These three prepositions are used to show that someone or something is near another thing or person. They are similar in meaning, however, there is a slight difference between them. 'Beside' shows that there is no space between two things. Also, it is not very common to use 'beside' with things that don’t have sides.

The umbrella is that chair.

There is no space between the chair and the umbrella.

'Next to' shows that there is nothing between the two objects or persons, although there might be space.

The umbrella is that chair.

There is nothing between the umbrella and the chair.

They're standing the car.

Remember that 'beside', 'next to', 'by', and 'near', are prepositions of proximity but contrary to 'near', the other show that something is placed in a vertical position relative to another thing.

Beyond shows a location further side of something. For example:

You can find the castle the bridge.

In the list below you can see some other examples of distance-related prepositions: 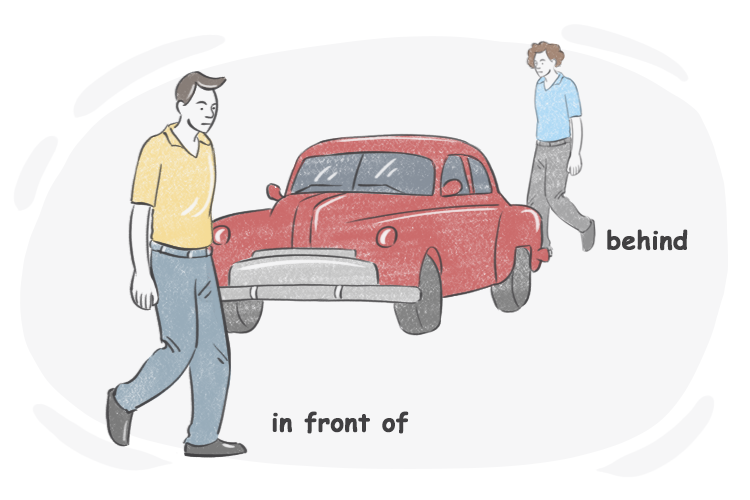 As mentioned before, we use 'up' to show that something is located at a higher position. Look at the sentence below:

The church is just the street. 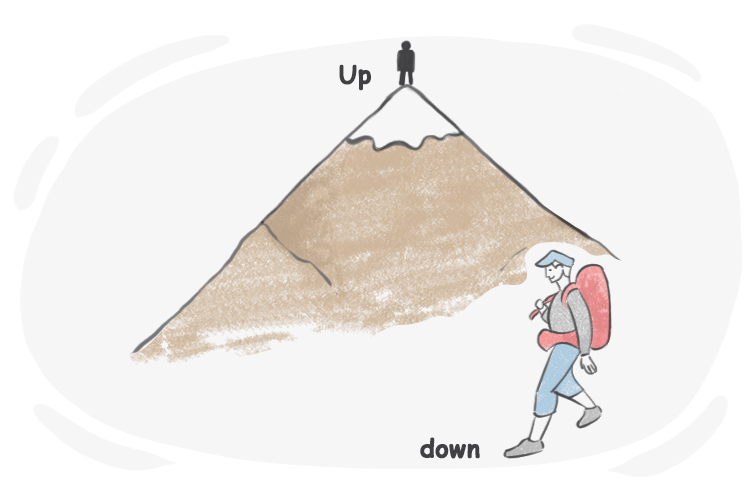 We use 'down' to show that something is located at a lower position. Look at the example:

Our school is just the street.

This preposition shows a position in the front part of another thing. It also shows the position facing something or someone.

The car was parked my house.

I get so nervous the camera.

'Behind' is the opposite of 'in front of'. It shows the position at the back of something.

The sun hid the clouds.

In the list below, you can see some other examples of Prepositions used to show Direction:

By using this group of prepositions, we can show the position in relation to an enclosed area.

'In' is used to show the position inside an enclosed (or semi-enclosed) area. Look at the example:

There's some tea left my mug.

‘Outside’ is used to show the position out of an enclosed (or semi-enclosed) area. Look at the example:

The fans were waiting the cinema.

In the list below, you can see some other examples of Prepositions used for Enclosed Area:

We use Prepositions of Place to show the location or position of someone or something. Based on their meaning we can put these prepositions into 5 groups:

Prepositions can refer to many things. Since there are a lot of prepositions in the English language and they are used a lot, we have to learn them completely.

Prepositions allow us to talk about the relationship between two words in a sentence. Here, we will discuss the different prepositions of time in English.

Prepositions of Direction and Movement

As their names suggest, prepositions of direction and movement show a movement from one place to another or show a particular direction.

Compound Prepositions or complex prepositions consist of two or more words that function as a single preposition. You'll learn about them here!

Complex prepositions are created by combining two or more simple prepositions like out of and as for. In this lesson, we will discover more about them.