'Up' has many functions in English including indicating location. In this lesson, we will discover all about this lesson. 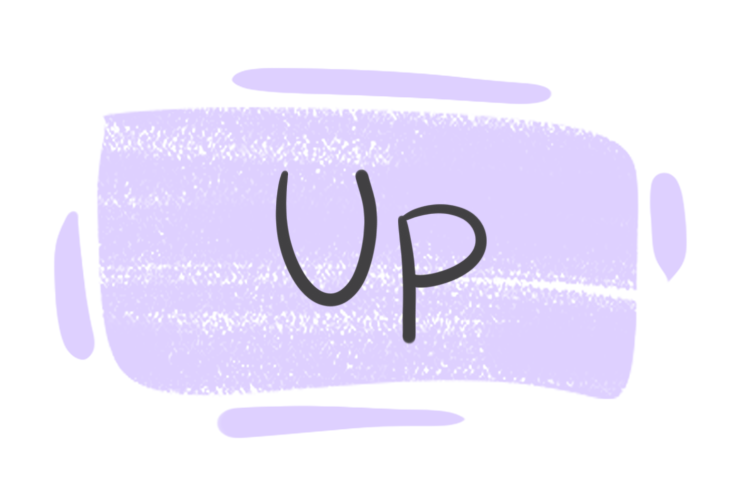 'Up' performs many functions in English. It can be used as a noun, a verb, an adjective, an adverb, and a preposition. In this lesson, we will discuss how to learn and use it.

'Up' as an Adverb

When it comes to adverbs, we have different types of them. Below, we are going to analyze how 'up' can function as different kinds of adverbs in sentences:

'Up' as an Adverb of Direction and Movement

'Up' can function as an adverb of movement and direction. Look below:

These plates are on that purple shelf.

I want this frame to be on the wall.

B : He's in the garden, digging carrots .

I want John to stand and speak the truth.

You can sit in bed and meditate for a few minutes everyday.

Professor Brown's office is on the second floor.

The meeting will be held on the 20th floor.

Smirking, the killer walked to me and admired my courage.

Here, the sentence is showing that the killer moved closer to that person.

I'm not the kind of person to go to strangers and have a conversation with them.

I'll be travelling in the country next weekend.

Since we use 'up' here as an adverb of direction and movement, we must put them after the main verb to show us in what direction the action is taking place. Take a look at the following examples:

I think they're going to see what happened.

Here, since the verb is transitive, the direct object has come between the verb and the adverb.

Sit and tell me what has hurt you.

'Up' as an Adverb of Degree

When we want to show that something is increasing in amount or degree, we can use 'up' as an adverb of degree. Take a look at the following examples:

Turn it , would you?

Here, it indicates that the volume must be increased.

Let's warm a little and then start exercising.

The killing rate has been increased to 20% in the past weeks.

Sometimes adverbs can join verbs and make completely different meanings. Adverbs no longer function as adverbs there, but they are called particles. Words like 'keep up', 'catch up', 'give up' and etc. are in this category. Below, we will learn all about them:

My friend and I late last night and watched 'Rosemary's Baby'.

I was completely hopeless until your name in my mind.

They were walking slowly when suddenly a wolf in front of them.

Sorry I wasn't able to with the class yesterday.

With all the technological advancement, It's difficult for old people to with modern life.

I cannot come on Wednesday because I want to all my stuff.

Mom, can you this present?

The letters were to each other with a ribbon.

The building was after midnight

Write your number on a piece of paper, it and hand it to me.

Learning to become independent is part of .

children is a huge responsibility.

My daughter tells me that she feels something between you two.

Here, it means that there is a problem between two people.

Something with him. He is acting weird.

five minutes and nobody volunteered to ask a question.

Jeremy's office has been next to the manager's office.

By the next summer, she will have to the directors' position.

I will the meeting in a few minutes.

If she keeps pickpocketing, she will in prison.

Hannah looks cute with her .

It might be helpful to know that British speakers use 'up' with verbs when they want to talk about a trial in court or an unsuitable road for driving. Look:

Charlie is for homicide.

That road is because a car has fallen off into the valley.

Mary wants to her work so as not to arrive late.

the potatoes in the garden.

Here, we have an imperative sentence and the verb is used at the beginning of the sentence.

'Up' as a Preposition

Another use of 'up' is to function as a preposition. Below, we are going to see the different kinds of prepositions it can be:

'Up' as a Preposition of Direction and Movement

We can use 'up' as a preposition of direction and moevement. Look:

With a bruise his neck, he went out to look for food.

I could see a big cockroach the ceiling.

Jerry is standing the stairs.

A : Have you seen Martha around here?

B : No, she might be the ladder in the garden.

She lives just that boulevard.

They waved at us and shot off the road.

It might come in handy to know that British people sometimes use 'up' when they want to talk about going to a place. Look:

He is going the club, isn't he?

the staircase, the mayor lectured us fifteen minutes straight.

As you can see, we can begin a sentence using a prepositional phrase.

The cat, the cabinet, suddenly hit the vase and broke it.

As you can see, we mainly put the prepositional phrase after the subject.

I can see a lizard the wall.

As you can see, we can also use the prepositional phrase after the object at the end of the sentence,

Please note that whenever we use a prepositional phrase at the beginning or in the middle of the sentence, we must have commas. Study the following examples for more clarification:

the roof, I saw Martha and Lizzie talking.

When we begin a sentence with a prepositional phrase, we must have a comma after it.

The little girl, the slide, was excited.

When we have a prepositional phrase in the middle of the sentence, we must put it between two commas.

'Up' as an Adjective

'Up' can also function as an adjective. In this part, we are going to see the different types of adjectives 'up' can be:

'Up' as an Attributive Adjective

We can use 'up' to indicate that something is moving up. Look:

This is an escalator.

There are no escalators here ma'am. You have to use the stairs.

Since 'up' is functioning as an attributive adjective here, it always comes before nouns. Look:

Where can we find the escalator?

'Up' as a Predicative Adjective

You can use the computer once it is .

When will the system be again?

Hannah has been really ever since she got that job.

I've been really since I started my singing class.

As you know, predicative adjectives are used after verbs. We can also put an intensifier before them to emphasize their effect. Look:

She's been really after her birthday party.

Here, an intensifier has been used.

I want you to check if all systems are .

'Up' as a verb has two meanings. Below, we will analyze them and see how they are used:

The government has decide to ban tax rates.

After dinner, they and left, without saying a word.

Mariana and broke up with me.

As you know, verbs mainly come after the subject. Please note that if we have an imperative sentence, we mus begin the sentence with the verb. Look:

We will the prices by the end of the month.

Here, an auxiliary verb has been used before the main verb.

The students and left the station.

You can't always expect to have in your life.

As you know, nouns can be used as the subject, object, or object of a preposition in a sentence. Look at the following examples:

If you only have in life, how can you change and become a better version of yourself?

Here, 'up' is functioning as the direct object in the sentence.

and downs are what all people experience in this world.

Here, 'up' is used as the subject of a noun clause.

Idioms and Expressions with 'Up'

We have many idioms and expressions with 'up' in English. Below, we are going to learn all about them:

You have been jumping and from the moment you came here.

Isn't she tired of bouncing and for no particular reason?

She had a terrible accident last week but today she is .

Although they had a traumatic evening yesterday, they are this morning.

with Joe? He looks sad.

Here, the speaker is greeting some people.

with all the this noise?

with all these sarcastic comments?

I think he's that project.

That mansion up the hill is sale.

She is the household chores.

They are to the cinema tomorrow.

Bridgette is so that she can no longer put herself in other people's shoes.

is not something my therapist would appreciate.

Maya's career has been since her promotion.

His grades have been since we changed his teacher.

The future of the country is .

I know it's important to you but the result is still .

Jennifer has been recently.

I don't think I've been physically these past few weeks.

What do you mean his last poem was not ?

Here, the sentence is showing someone is planning something.

The computers are all .

After a complete repair, the machine was .

I wish someone had told me about the of living abroad.

Maria has had many in her childhood.

This expression is mostly used in negative sentences.

, they've received no news of our daughter.

The word ago is commonly used when indicating something in the past. In this lesson, we will learn more about it.

'Through' is a word in English that may confuse learners at first sight. It functions as a preposition, an adverb, and an adjective.

The word 'past' has many functions in the English language which may cause confusion. In this lesson, we will solve any uncertainty about this word.

In this lesson, we will discuss the word 'down' and discover this word in-depth since it functions in many different structures.

'Not' is a common negative marker in English. In this lesson, we are going to learn all about it.

You have used and heard 'No' many times. 'No' has many functions including being used as a determiner, an exclamation, an adverb, and a noun.