You may have used the word 'but' many times. It can be used a conjunction, an adverb, a preposition, and a noun. In this lesson, we will discover more. 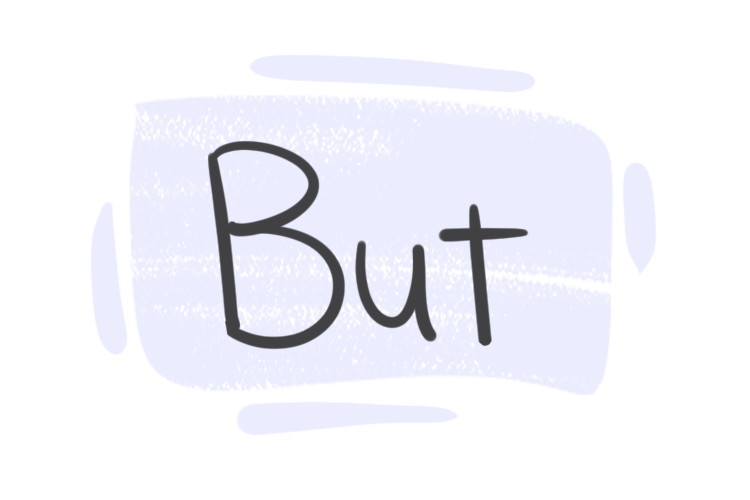 'But' can act as a coordinating conjunction, an adverb, a preposition, and a noun. In this lesson, we will learn all about it.

'But' as a Coordinating Conjunction

As was stated above, 'but' can function as a coordinating conjunction. To be more exact, since 'but' is used to show contrast in two ideas, it is mostly in the category of 'concession conjunctions'. Below, we are going to see how:

I really wish I could help you, I don't want to.

As you can see, the second sentence differs from the first one.

Gloriana has her hands full right now, she can practice with her daughter in the afternoon.

Isn't there anything else to eat bread and milk?

Here, 'but' can be replaced with 'except' and the sentence will still remain the same.

There's nothing you could do listen to her sorrow.

She cancelled our plans not once, several times.

I don't want to travel to that island, to live there.

Please note that we never use 'but' at the beginning of a sentence in formal, written English.

She told me she likes you, she is afraid to get close to you.

We can do nothing, to wait for the final results.

As you know, coordinating conjunctions are used to connect words, phrases, and clauses. 'But' is used to show the contrast between two words, phrases, or clauses. Please note that both ideas are equally important. Look below:

I wanted to talk this out, you keep pushing me away.

As you can see, the two ideas oppose one another.

That girl is caring distant.

Here, two words are joined by the conjunction.

Please note that if we use 'but to join two clauses, we must have a comma before the conjunction. However, there is no need for commas when joining two words. Look:

My friend is kind shy.

The girls are moving to the east, they were supposed to stand where they were.

'But' as a Preposition

As was stated, 'but' can function as a preposition. Below, we are going to learn about the different prepositions it can be:

'But' as a Concession Preposition

'But' can be a preposition and come before nouns and noun phrases. Since it shows the contrast between the two ideas it connects, it is called a concession preposition. When we want to state an exception, we use it as a preposition. Study the following examples:

You care about everyone, me.

Susan is going to walk you home everyday Friday.

Since we do not begin a sentence with 'but' in formal English, we can never start a sentence with a prepositional phrase of 'but'. It always comes before nouns or noun phrases. Take a look:

Everyone was paying attention, me.

They are going to visit us everyday, today.

'But' as an Adverb

As stated above, 'but' is also an adverb. Below, we are going to analyze the kinds of adverbs it can be:

'But' as an Adverb of Concession

Another function of 'but' is to act as an adverb. It can modify verbs or adjectives. It is called 'concession' because it shows contrast. Look at the following examples for more clarification:

The least they could do is help.

She is a mere ghost now.

As it was stated above, 'but' as an adverb can be used to modify verbs and adjectives, so it comes before them. Take a look at the following examples:

All they can do is wait.

Here, it is modifying a verb.

This place is a ghost spot of old memories.

Here, it is used to modify an adjective.

When we want to emphasize that something will happen, regardless of any objections, we can use 'but' as a noun. Take a look:

No cause we are going on a summer vacation this week.

As you can see, regardless of the addressee's objection, there is emphasis on the action to happen.

I do not want to hear any .

Since 'but' here is functioning as a noun, it can be the subject , object of the verb, or the object of a preposition. It can also come after negative markers. Take a look:

I said no here.

Here, 'but' is the object and has come after a negative marker.

Too many ifs and are for weak people who do not take a step to their dreams.

Here, 'but' is part of the noun clause.

Spoken Uses of 'But'

'But' can also be used in different contexts only when we are having a conversation with someone. Take a look below to understand how it can be used in spoken English:

A : The teacher belittled our victory today.

B : that's our greatest achievement.

A : I thought she could dance as beautifully as she had said.

B : it didn't, so stop making such a big fuss over it.

Angie wants no one, no one, to talk to.

She was talented, I mean talented.

the point is, where do we begin to understand the meaning of the world?

let's get back to the main topic.

I'm sorry, I am not in a position to answer that question.

Excuse me, you cannot enter here.

It might come in handy to know that in Australian English, we can put 'but' at the end of the sentence when it is functioning as an adverb. Take a look:

'But' and 'however' both show contrast and contradiction. The only difference is that 'but' functions as a conjunction, and 'however' is used as an adverb.

'Or' is a commonly used word in the Englsih language. In this lesson, we will learn all about this coordinating conjunction.

'For' is a widely used preposition. However, that is not its only function. In this lesson, we will discuss all about this word.

'Nor' may be a confusing word for English language learners. It is both a conjunction and an adverb. In this lesson, we will learn all about it.

'Yet' is a commonly used word that has different functions in the English language. It can be used as both an adverb and a conjunction.

'So, where have you been?' You may have heard such sentences and wondered when and how we use the word 'so.' In this lesson, we will learn more.

You may want to set out a few conditions. In this case, you can use the word 'if,' but you must know its rules and uses. In this lesson, we will learn more.