'So, where have you been?' You may have heard such sentences and wondered when and how we use the word 'so.' In this lesson, we will learn more. 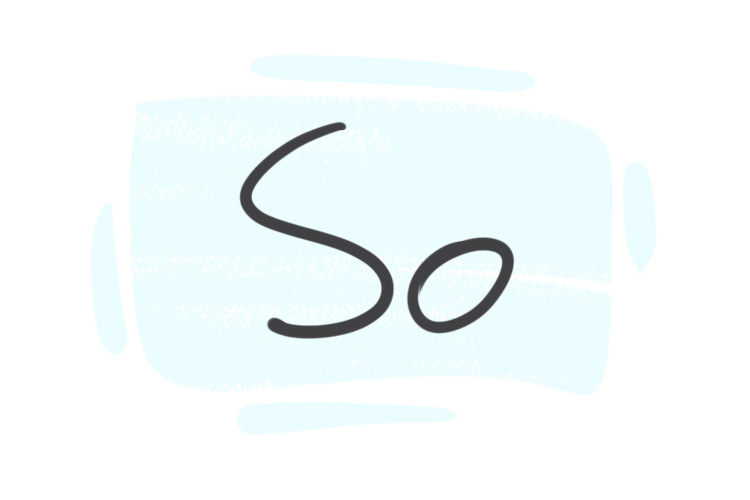 'So' can be used as both a conjunction and an adverb. In this lesson, we will discuss how to learn and use it.

'So' as an Adverb

'So' can function as an adverb. Below, we are going to analyze the different kinds of adverbs it can be:

'So' as an Adverb of Degree

'So' can be an adverb of degree. Look below:

The manager was being nice to me.

How could she lie to many people?

Ariana was weak that she couldn't even hold her tears back in front of her ex.

As you can see, here 'so' is used to indicate how weak the mentioned person had been.

My father changed sudden that we couldn't believe he had been who he was before.

'So' as a Commenting and Viewpoint Adverb

'So' can also function as an adverb of viewpoint and commenting when we want to repeat what has been said about another person, or when we want to emphasize an idea. Take a look:

A : I talked to the professor last night.

His daughter has been affected by Covid-19, and has his wife.

A : Do you think these two look good together?

A : Do you think she will get better?

'Since 'so' is functioning as an adverb here, it mainly comes before adverbs or adjectives to modify them. Look:

Why are you being to me?

Nice is an adjective.

Everything had happened that I only tried not to lose my mind.

Suddenly is an adverb.

Spoken Uses of 'So'

She is not the suitable applicant for this job.

As you can see, it is only used before a negative marker.

I'm sorry but you are not the candidate we are looking for.

', tell me about your new life in Canada.'

She's about tall and she has blue eyes.

The tables are about wide.

A : Anna talked for three straight hours on the phone.

A : Monica goes jogging every weekend.

B : That is just Monica.

, he went inside the hideous house and found her mother trembling on the floor, with her mouth full of blood and dirt.

, the hero of the story finds his true love and they live happily ever after.

This is used in spoken English and it is impolite.

She was mentally unstable, and was her mother.

A : The Cottons are famous for their religiosity.

, how've you been doing reverend?

, ladies and gentlemen, shall we begin our contest?

'So' can also be used differently in a literary text. If we want to say that something continues as the way it was described, we use 'so'. Take a look:

Cotton Mather and Miss Hale spent days together, and began a lifelong relationship.

Idioms and Phrases of 'So'

As you might probably know, 'so' can be used in various idioms. Let us take a look below:

If you are able to come to class on time, .

Here, the sentence indicates that it is even better that the particular person can make it to class on time.

If your friend has time to practice guitar more, .

As you grow older, you will be able to maintain your self-composure more, .

The building was exploded accidentally, .

In their marriage, Anna is the one who wears the trousers, .

Here, the sentence metaphorically states 'Anna' has the upper hand.

A : Don't you think he's acting a bit weird?

B : Yea, it's like a monster has eaten him from the inside out, .

, there are no holidays this week.

This idiom is synonymous with as far as I'm concerned.

, they haven't talked to each other.

That is the opposite of what you said, father.

The final decision has been made, much room for change.

We avoided them maintain our self-composure.

The skilled waitress coaxed the customer get a large tip.

'So' as a Conjunction

It was also mentioned that 'so' is a conjunction. Let us see what kinds of conjunction it can be:

'So' as a Coordinating Conjunction

As you know, conjunctions are used to join words, phrases, and clauses. However, note that 'so' is only used to connect two independent clauses together which is why we call it a coordinating conjunction. Take a look:

I was sleepy, I cancelled the meeting today.

Hanna was tired, she decided to take a break.

Since 'so' is a conjunction here, we can only put it between the two independent clauses we want to connect. Take a look:

My father wasn't in the mood to cook, he ordered a Pasta and a Caesar salad.

The hotel manager got angry, he stomped his foot on the ground like a child and hurried away.

Please note that when we use 'so' as a conjunction, we must always put a comma before it.

'Nor' may be a confusing word for English language learners. It is both a conjunction and an adverb. In this lesson, we will learn all about it.

You may have used the word 'but' many times. It can be used a conjunction, an adverb, a preposition, and a noun. In this lesson, we will discover more.

'Yet' is a commonly used word that has different functions in the English language. It can be used as both an adverb and a conjunction.

You may want to set out a few conditions. In this case, you can use the word 'if,' but you must know its rules and uses. In this lesson, we will learn more.

'Since' has different functions in the English language. In this lesson, we will discover more details about this word and learn when to use it.

'Unless' is commonly used by English language speakers. In this lesson, we will learn all about this word and when and how to use it.