'It' and 'they' are both personal pronouns. If you want to know what are their uses and functions under different circumstances, don't waste another second! 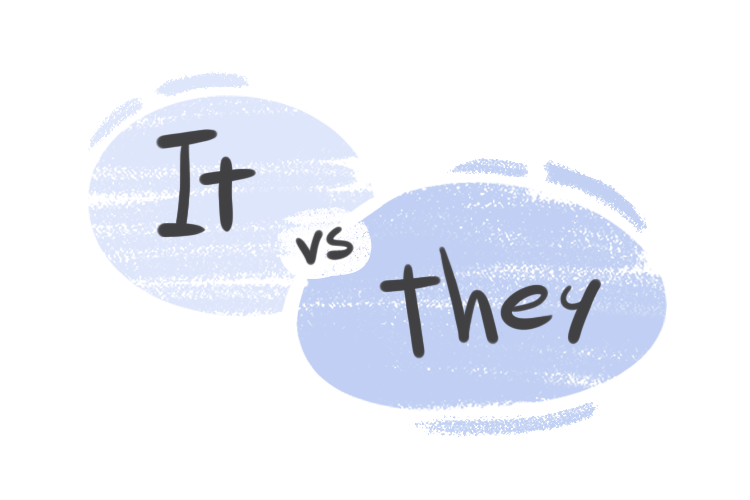 'It' and 'they' are both personal pronouns in English. Their most obvious difference is that 'it' is a singular pronoun, and 'they' is a plural one.

We can use 'they' to refer to:

Which one to use in each case?

Referring to One Thing

I watched Lord of the Rings movies several time. are my favorite.

For nouns that always come in plural but they are actually one thing, for instance, pants, glasses, trousers etc. do not use it. You should use 'they.'

I bought a pair of pants. 're black.

Although, using 'it' for these special nouns is considered wrong, but you might hear someone saying a sentence like:

I bought a pair of pants. 's black.

It is grammatically wrong, but used anyway.

If you want to refer to Company names like Microsoft or McDonalds, you might think, since companies are made of up more than one person, the correct choice is 'they'. But that is a common mistake. Use 'it', not 'they'.

McDonalds added a new snack to menu. 're advertising it nonstop.

Now, look at these examples:

I found a great restaurant. have the best sushi.

The second part of the sentence is incorrect. Because 'they', a plural pronoun, is referring to 'a great restaurant', a singular noun phrase. So, the correct version would be:

I found a great restaurant. has the best sushi.

So, keep this rule in mind: for all collective nouns, you must use 'it' not 'they'. Unless on a specific context that you want to mention the people working at a company, army etc. Some examples of the collective nouns are:

Nowadays, due to the new revolutionary awareness about gender, in modern English, if we want to refer to only one person, but we do not want to or don’t know the gender, instead of using 'he/she' or 's(he)' or 'he or she', we simply can use 'they'.

Every child deserves an education. must have a chance to follow dreams.

As you might've known already, 'he' and 'she' are the only gender-specific personal pronouns in the English language. Here, we'll explain them in more detail.

She and I vs. She and Me

What is the difference between 'she and I' and 'she and me'? Can we use both options? Or none of them is correct? Let's find out!

'It' and 'this' are both pronouns, but they are not synonymous. Here, we will discuss their similarities and differences.

'It' and 'They' are both pronouns, but what is the difference between 'it' and 'they'? Here we will discuss the differences and similarities of the two.

What should we choose when we do not want to be explicit about gender specificity? Well, in this lesson, you will learn about the new pronoun in English!

In writing academically or speaking formally, it is important that you don’t distinguish between genders. Here we will learn how!