"Either" vs. "Both" in the English Grammar 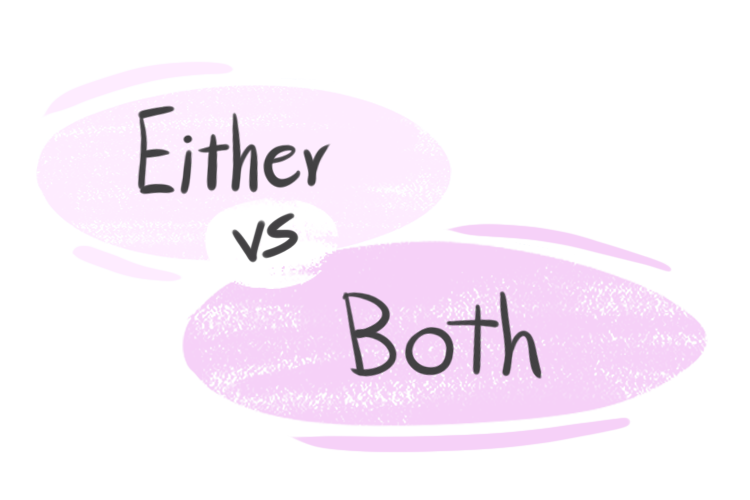 As you know, 'either' is used without any nouns afterwards alone before the verb of the sentence as a pronoun. As a determiner, 'either' is used before singular nouns to define them. As an adverb, 'either' is used to agree on a negative statement. As a conjunction, it is usually followed by 'or' and it connects two clauses.

library is filled with stories of perilous adventures of Tintin. → determiner

was good, but I had no money to by even one. → pronoun

I didn't feel numb after the long reclining on my arm and Sara didn't . → adverb

the peril or the harm in this job couldn't stop him. → conjunction

As a determiner, 'both' is used before plural nouns. As you know, as a pronoun, it is used immediately before the verb of the sentence. As a conjunction, it is followed by the linking word 'and', and it is good to know that in this function it can be followed by two singular or plural nouns.

women shrieked when they discovered the corpse. → determiner

of them were frightened be the sinister shadow at the stairs. → pronoun

After wining the wager and the big doll bear, John treated everyone to free drinks. → conjunctions

When it comes to choosing between two options 'either' refers to only one of them. It means we are not allowed to choose both of the choices, only one is permitted.

king has their own policy to have people obey them.

When given all the data on corpse, Colombo was able to solve the murder.

When it comes to choosing between two options, 'both' is used to choose all of the two choices. It means we can have two out of the two.

I stayed weeks of my holiday in the bed because of the dismal weather.

Since 'either' refers to only one choice between the two, the verb after it is used in the singular form. However, in informal spoken English people use a plural verb with 'either' that is technically wrong.

soldier who abandon his hurt friend is going to jail for over 2 years.

the knife or the ax is keen to cut the meat of the dead deer.

Because 'both' refers to two choices out of the two, the verb after it is used as a plural verb. Remember there is no other choice in the grammar of both. We mean you cannot use a singular verb with both at all.

tact and morals are necessary for one to gain experience and live better.

As a determiner, 'either' is followed by a singular noun. Even if we are going to mention two options, the noun after either must be singular.

You will face hardship or ease during the fight.

gallant knight entered the contest to win the hand of the princess.

When we broke in, we found apartments vacant.

We have lost the data and the specimen.

What about Negative Verbs with Both?

Since we are not allowed to use a negative verb with 'both,' we use 'either' instead of 'both' with the same meaning.

Let us take a look at the table below to share some more differences.

How They Are Similar in Their Meanings

As it was mentioned earlier, sometimes 'either' has a similar meaning to 'both' with a delicate difference. Technically 'either' means one of the two, but semantically it refers to both of the nouns. Look at the examples below:

This sentence means the first one is good and the second one is good.

Using of after Them

are followed by 'of' when they are used before some noun phrases and determiners. Look at the examples for more clarification. Remember in this use we can use a plural noun after 'either of.'

the bachelors was trying to be his best man.

my friends couldn't carry the tune, so they were never qualified for the Girl's chorus.

in Combination with Articles

You can never put an article directly before 'both' and 'either.' However, you can use determiners after them. Remember sometimes before the determiner we have 'of.'

Both of them can act as determiners, pronouns, adverbs, or conjunctions. In this lesson, we will learn their similarities and differences.

It is rare to see these two words in the standard English context. But, since it is a question on your mind, let's know more about them.