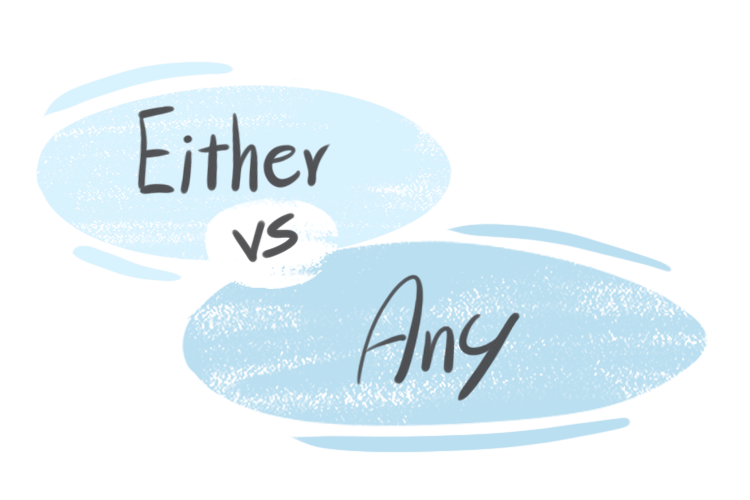 What Are their Main Differences?

is used in negative sentences with negative verbs when it is used to agree with a statement that was mentioned earlier. In other functions, for example when it refers to one of the two things, it can also be used in affirmative sentences.

"She is not in charge of this company. I am not ."

blend of color is suitable for this hat.

There are not books on the shelves.

Are there pens in your pencil case?

You can have room to stay the night in.

is followed only by a singular countable noun. It means we cannot use uncountable or plural nouns after it.

One can have impression of him.

There is not milk left in the glass.

Here, 'milk' is an uncountable noun.

There are not students in the class room.

can act like both determiner and pronoun. As a determiner, 'either' is used before singular nouns to define them and as a pronoun, it is used directly before verbs with no nouns after 'either.' 'Either' as adverb is used to agree with a sentence which was said before.

house is enormous for us. → determiner

"Which one is your favorite?" " is a disaster." → pronoun

Are there markers in the class? → determiner

She does not like the history teacher. I don't .

Any as an Adverb

'Any' as an adverb is used before adjectives and adverbs to mean at all especially in American English.

This chair is not comfortable.

Either of and Any of

is followed by 'of' when it is used before noun phrases or pronouns. Remember whether the noun is plural or not, the verb after either is used in the singular form.

these girls is beautiful.

her talents was noted when she was in first grade.

I do not believe your words.

If my friends wants to come, they are welcome.

Any as a Pronoun or Determiner

'Any' as a pronoun is more likely to be plural, while as a determiner, it refers to individuals and it is singular, but it is not a strict rule and it can be flexible depending on what the speaker or writer means.

Is of the ice-creams left?