Both of them can act as determiners, pronouns, adverbs, or conjunctions. In this lesson, we will learn their similarities and differences. 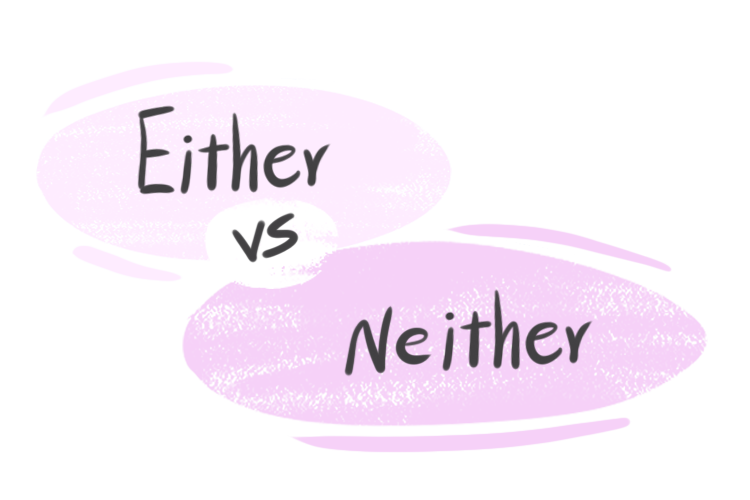 'Either' and 'neither' are different when it comes to their meanings. Although they can have different grammatical functions, they may have some similarities too.

What Either and Neither Mean in a Sentence

has different grammatical functions, so it is natural for it to have different meanings. But technically it means one of the two. Generally, either is defined as 'both' or 'one.'

his grandson has founded their own company.

is going to be her favorite, she loves chocolate chips, whether coconut or mint flavor.

has different grammatical functions as well, so it has different meanings like 'either' does. It means none of the two. In general, 'neither' is defined as 'none' or 'not either.'

of its eggs was hatching out.

of their houses was collapsed by the earthquake.

Neither and Either as Determiners

is used as a determiner before a singular countable noun with an affirmative verb to refer to something which agrees with both options being mentioned. 'Neither' is a negative marker and it can make a sentence negative on its own, therefore it does not need a negative verb.

is used as a determiner before a singular countable noun with a negative or affirmative verb, to talk about two choices. In this case, 'either' is distributive.

manager is facing a major problem.

'Distributives' are determiners that are used to indicate how something is shared out or divided.
The distributives are 'each', 'every', 'either', and 'neither'. They are used with a singular noun and as a result, they require a singular verb.

Neither and Either as Pronouns

is used as a pronoun with an affirmative verb to mean not one and not the other. It is good to know that whenever we are using 'neither' as a pronoun no noun follows it, so it is directly followed by a verb.

was filled with horror.

There were two of them, but knew the address.

is used as a pronoun with both negative and affirmative verbs to mean a choice of one or the other. As you know, it is not followed by a noun. In this function, 'either' is used to refer to people, things, or situations that are both possible, so as a result, it does not matter which.

is judged harshly in this court. Whether the innocent or the guilty.

Neither and Either as Adverbs

is combined with a positive/affirmative verb and it comes before an auxiliary to mean 'too.' The structure is [neither + auxiliary verb + subject]. Sometimes there is a tendency to use plural verbs because of the nouns that were mentioned earlier, but using a singular verb with it is more common.

Neither as an Adverb with Affirmative Verbs

To agree with verbs such as hate, dislike, etc, we are not allowed to use the term 'neither'. Because, although they imply a negative meaning, they are still formed as a positive verb.

is combined with a negative verb and comes last in the sentence and it means 'too.' The structure is [subject + auxiliary verb + either]. Remember using a singular verb is more common even if we are talking about a plural noun. In this case, you put 'either' at the end of the second statement to emphasize that there is a connection between the two clauses which is correct for both.

Kelvin wasn't helping, I was .

Their Position as an Adverb

'Me neither' is an expression that means exactly the same as 'nor do I' and 'neither do I'. The difference relies on the situation you are talking about. Some believe that it is a matter of region, and based on where you are living 'me neither' would sound either formal or informal, for example they say 'me neither' is used in UK and Australia a lot. However, some agree that using 'me neither' is technically wrong.

Me Neither, Neither Do I, or Nor Do I?

Me Either or I don't Either?

Neither and Either as Conjunctions

can be used as a conjunction, and as conjunctions do it connects two clauses that both, are not true or will not happen. The thing in this function is that 'neither' is followed by 'nor' to give two options. 'Neither' is used before the first item and other items would follow 'nor' instead.

my husband my son does their own laundry.

He won the game broke his own record.

can be used as a conjunction used to connect two clauses. It is important to know that 'either' is followed by the term 'or' in this case. The point is to use 'either' before the first option and others should follow 'or.' Remember in this function, 'either' can refer to individuals or both the alternatives.

His girlfriend could call him back at least go online to respond to the message.

Porsche BMW will worth the price.

Here are the differences in the table:

is taking the advice, so they are going to fight for good.

Neither and Either with Plural Countable Nouns

We use 'neither of' and 'either of' when it is followed by pronouns and plural countable nouns which have determiners (my, his, the, these, those) before them. To be more clear it is said neither of and either of are used before pronouns and noun phrases.

my friends knew about my boyfriend.

the shirt looks nice on you.

them can be a smart choice.

How They Can Be The Same in Their Meanings

"She doesn't cook for tonight." "Neither does the chef." or "The chef doesn't ."

My sister is not married. am I.

Everything is considered one word and it is an indefinite pronoun. But what about its alternate spelling with space between the two parts? Is it also correct?

Everything vs. All Things

'Everything' is a singular indefinite pronoun. 'All things' is a plural noun phrase. Judging by this fact, let's go through their similarities and differences.

It is rare to see these two words in the standard English context. But, since it is a question on your mind, let's know more about them.