Negation is the act of making a term, phrase, or clause negative or opposite. In this article, you will learn how to make negations. 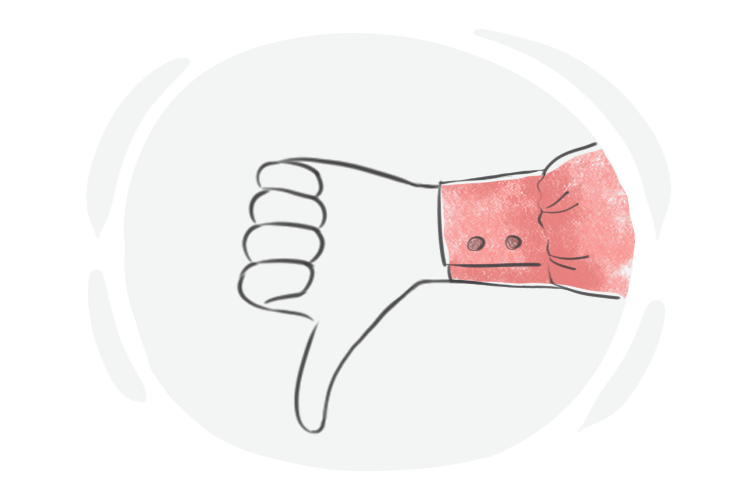 What Does Negation Mean?

We have different negative words to form negations:

There are some adverbs in English that carry a negative meaning and using them in affirmative sentences makes the whole sentence negative and there is no need to use negative verbs anymore. The most important adverb that is used as a negative marker is 'not'. Other negative adverbs are hardly, little, never, only, scarcely, and seldom.

she speaks to me.

In this example, it means almost never.

have I experienced this before.

butter is added to the bread.

Negative pronouns are words such as nobody, no one, none, neither, nor, etc, that are used with negative meaning as negative markers in affirmative sentences. Here are the examples:

is more important than you.

If our sentence includes ''to be'' verbs we just put "not" in front of the predicate noun or adjective. Usually this way will place "not" after the to be verb.

She is her sister.

He was ready to go to the party yet.

If our sentence includes auxiliary verb "have", we will do the same as we do with all of the perfect tenses, we will place "not" right after the different forms of have (have, had, has) and before the main verb participle.

He has been around lately.

They have cooked dinner for their guests.

I promise, I let you down.

As you know we have auxiliary verb have and action verb have, let's remember to not confuse them.
The action verb "have" uses "do" just like other action verbs.

They do not anything to do.

He doesn't the books.

If our sentence includes modal verbs like should, can, must and so on, we should place "not" after the modal verb and before the main verb.

She stay out so late.

He go to his friend's sleepover.

All the Other Verbs

If our sentence includes any other verb rather than what we mentioned we should use the auxiliary verb "do" to negate it.

He sleep well at nights.

She play this game well.

I do the dishes.

How to use "Neither-Nor" or Neither Without Nor

my dad my mom lets me stay at my friend's sleepover.

the red dress the green one suits me.

If we want to use "neither" without the "nor" we should place it before the noun to show the meaning of "not this one or the others".

We could also use "neither" as adverb like the following examples:

I don't like to go to parties and does my best friend.

She cannot sleep and can her sister.

It can be used as a pronoun too, let's see:

I bought two dresses but fitted.

To negative a word, we can use the prefixes such as: de-, dis-, un- and suffixes such as –less. Here are some examples:

Verbs such as 'think,' 'believe,' 'suppose', etc. which imply a feeling of uncertainty are usually used negatively and the sentence after them is usually an affirmative sentence. Check out the examples:

With the Verbs 'Wish' and 'Hope'

The verbs 'hope' and 'wish' are not usually negated and instead, the sentence after them is usually in negative form, but not always. Sometimes both sentences can be affirmative. Check out the examples:

I , Harry get in trouble.

In this example, both statements are used affirmatively.

To make negative questions all you have to do is to negate the auxiliary verb of the question. You can also use negative pronouns or adverbs in echo questions as a negative interrogative clause. Here are the examples:

you at the party?

Why you call me?

you, but who is coming again?

well, the steak was immediately taken back to the kitchen.

Making excuse, he left the apartment.

In this example, a negative determiner is used to negate the non-finite clause.

a single noise, he entered the room.

cheat on your spouse.

We can use negation to emphasis on something by using "at all" and "whatsoever", they almost have the same meaning, but "whatsoever" is stronger.

There is left to say.

The place had no light .

We can also use negation to be more polite at times by emphasis.

Have I given you any trouble? –no none dear!

Negation is the act of negating a sentence, using negative markers or negative structures. Here are the important negative categories.

Cleft sentences are complex sentences that have a meaning we can express by a simple sentence. They are used to emphasize one part of a clause. Let's see.

Negation is the process that turns an affirmative statement into a negative one. In this lesson, we will learn about ways of creating negative sentences.

In this lesson, we will learn about negative structures with nouns and pronouns. Do we have negative pronouns? How can we make a negative noun?

In this lesson, we will learn about negative structures with adverbs. Do we have negative adverbs?