"Several" vs. "Few" in the English Grammar 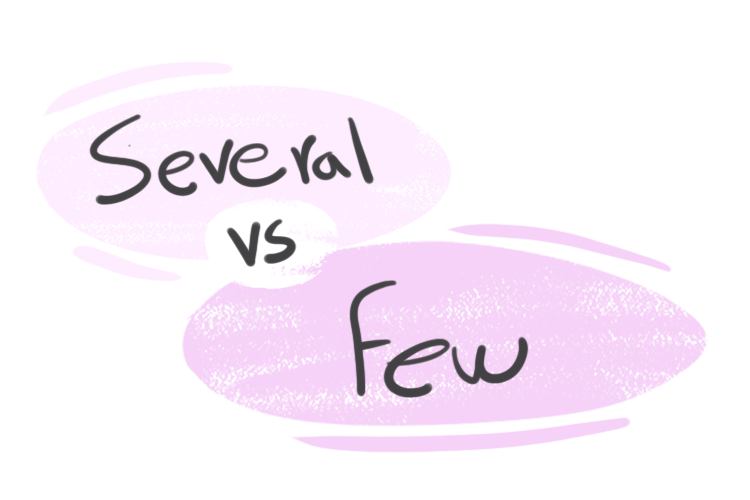 At first, it is important to know that both 'few' and 'several' refer to a small number. 'Few' refers to 'almost nothing' for example if you consider it as a number it is between 'one or two.' 'Several' refers to a small number, but it is more than 'few' less than 'many'. For example, if we consider it as a number it is 6 or 7. Remember all these numbers are approximate and they can change depending on the context.

What Several and Few Mean

'Several' and 'few' mean not many. 'Several' means 'some' and it is more in number than 'few'. 'Few' refers to a small number which is barely considered some only when the article [a] is used before the term 'few.'

people die because of the smallpox nowadays.

animals are being killed by the hunters in this jungle.

I have been in Italy times.

They have burned the cookies times before the cooking competition.

As you know, determiners are used before nouns to modify them. Pronouns are used alone without any noun placing immediately after them. 'Few' and 'several' follow all these rules as pronouns and determiners.

Let me buy things at the mall first. → determiner

They have read books. → determner

He was in jail, and believed that he is innocent. → pronoun

How Exact They Are

As it was mentioned earlier 'few' and 'several' do not specify an exact number.

I lost things in the hotel room.

apples fell from the tree.

Few of and Several of

can be immediately followed by plural nouns. But whenever there is a noun phrase we mean a determiner+a noun or a pronoun, after them, They follow this structure:
[Few/several+ noun phrase], or [few/several+pronoun]. Remember, since there is not any noun immediately after 'few' and 'several', they are considered pronouns in this case.

There were many colors in the painting, but only them were cold colors.

my friends are living abroad and they have no problems with it.

These two words are different as their meanings require.