"Several" vs. "Many" in the English Grammar 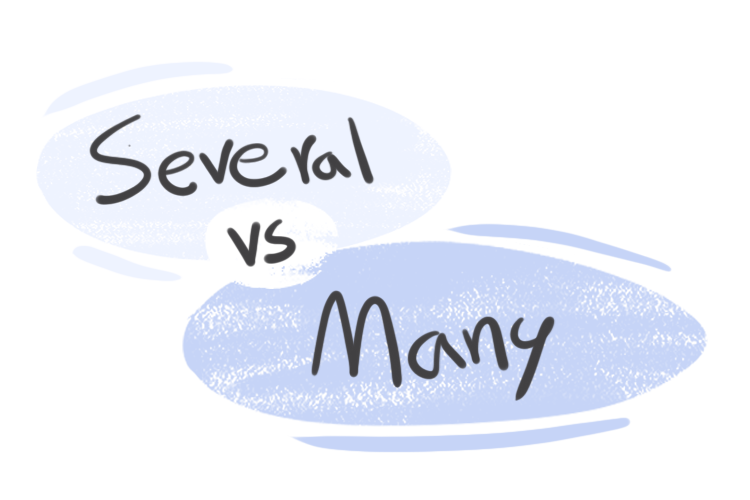 In fact, compared with the term 'many', 'several' refers to a smaller number; while 'many' refers to a larger number.

refers to a small number. When we use the term 'number,' it implies that we are talking about a countable noun. So, 'several' has nothing to do with amounts and uncountable nouns.

We have spent hours together when we were on vacation.

refers to a large number. It means that whenever it is used before a noun it modifies its quantity. As a quantifier, it refers to a great number.

years have gone,, but he was still in love with Rosie.

believe he is responsible for his sister's death.

'Many' as a noun means 'the majority of' something or even people. In this case, you can also add determiners before it. For example, you might have heard the phrase 'the many' a lot. Check out the examples for more clarification.

The clown attracted the attention of the .

His arts are inspired by his love for Katie.

Common Expressions with Many

is mostly used in American English to refer to the same number of something that has been mentioned earlier.

John has five certifications and I think I have .

Write answers I wrote and we will decide which one is a better answer to each question.

is used to indicate how large and surprising the number of the thing we are referring to is. Actually, it shows how large we mean by 'many.'

This ant hill seems to have one million ants in it.

She drinks three bottles of wine form morning till night.

Using Too and So

We can use the terms too and so before the term 'many' to intensify it. And it is actually, really common to use 'too many' and 'so many' in English. But the word 'several' cannot follow 'too' and 'so.' For example, there is no such thing as 'so several' or 'too several.'

using many a is considered old-fashioned and formal, however, generally 'many' is considered formal in affirmative sentences. 'Many a' is not used in modern English but it has the same meaning as 'many.' The important thing to know is that we do not use plural countable nouns and as a result it, we use a singular noun with it, as well. Remember 'many' is mostly used in negative and interrogative sentences, however, we use it in affirmative sentences a lot in everyday English.

human tried to step on the moon.

professor has refused to give an exam at the end of the semester.

She doesn't have friends. → determiner

would buy this bottle but I wouldn't. → pronoun

How Verbs Agree with Nouns

as determiners, are followed by plural countable nouns. As a result, both of them require plural verbs. As pronouns they refer to a large number so, we have to use plural verbs with 'many' and 'several.'

people hate some aspects of their work.

love sushi, but I don't.

I will stay for weeks in Tokyo.

books are in the library.

Many of and Several of

Check out the examples for more clarification.

her co-workers backbit behind her back.

my arts refer to ancient monuments.

When I was young I have had loyal friends.

Mia's grandmother forgot to bring things such as jam and bread.