"Each" vs. "Either" in the English Grammar 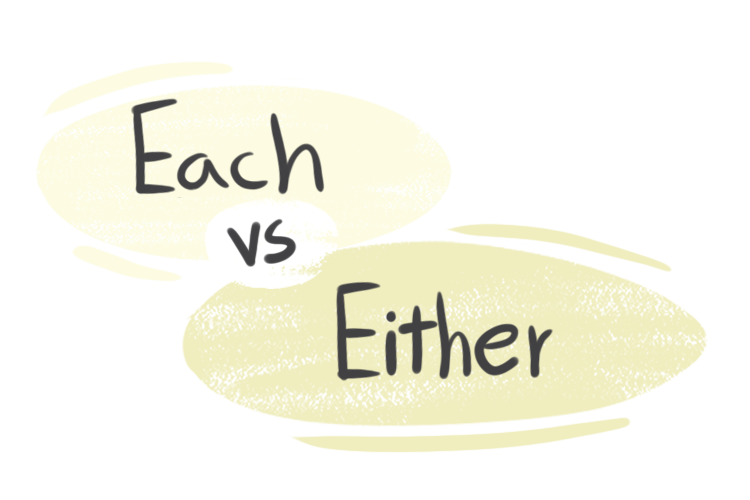 Using 'Or' after Conjunctions

In fact, to be clear we have to say that since 'either' can be conjunction as a result it can be followed by the the term 'or.'

my sister my brother do not get along well with each other.

the doll the flowers will make her happy on her birthday.

Since, it is not conjunction, the term 'or' does not follow 'each.'

can be used in both negative and affirmative sentences. Mostly, it is used in negative sentences. Usually, when we use the term 'either,' we are talking about two possibilities or two options.

of them was standing in line to get their bonus.

I didn't call of my friends.

We usually use 'each' when we want to refer to individuals as a whole group. Actually, when we use 'each' we want to say that the listener has to think about all the members of a group individually.

They have traveled to angle of the world.

Gianni said no to of the dresses we have chose for her.

It did not make of us happy.

There is basketball and volleyball you can choose one.

How Verbs Agree With the Nouns after Each and Either

both are followed by singular nouns after them, and as a result, it is obvious that the verb used with them is a singular verb.

sushi or pizza is good to order.

house is suitable for them 'cause there is only two of them.

dress looks great on the bride.

Either of and Each of

us knows the problem.

our houses is big and luxuriously designed.

of them was waiting for their turn to get a shot. → pronoun

Either One and Each One

'Either' and 'each' as determiners are followed by 'singular nouns,' the term one can replace the 'singular noun' used after 'each' and 'either,' but it has to be clear what we are referring to. So, mostly it is used when we have just mentioned the noun in previous statements. Check out the examples for more clarification.

She had five sons, had their own personality.

The hens had laid two eggs, .

of the students can choose their favorite course to study.

'Both' and 'each' have two different meanings which makes them easy to understand.

These two words are different as their meanings require.