"Several" vs. "a Number of" in the English Grammar 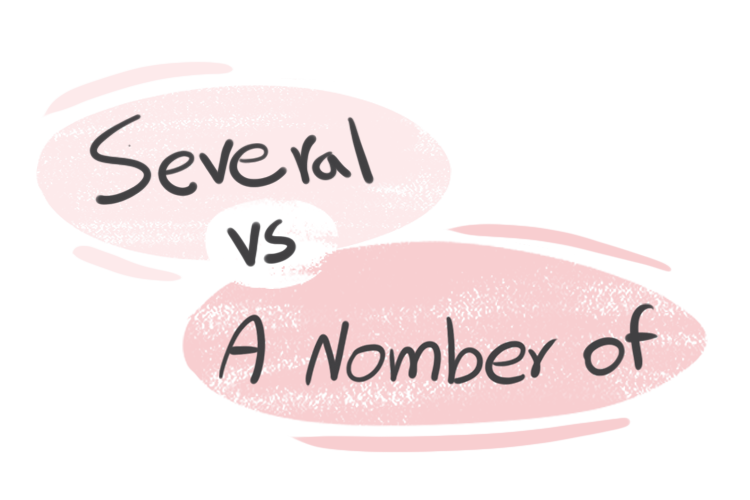 'A number of' refers to a flexible large number that is close to the exact number. 'Several' means more than a few and it refers to a smaller number.To be clear, first we have to observe their meanings one by one.

is considered an expression that acts as a quantifier such as 'many'. People sometimes get confused when they use the indefinite article 'a' and the term number as singulars. But here is the thing; Think of a number of as the same as , 'many'. Remember exactly the same as many it is used with plural nouns and plural verbs. Be careful the meaning is not the same as 'many'. A number of means more than 'a few,' but 'not many.'

birds are hunted by the hunters.

In this example, we don't know the exact number. It refers to a large indeterminate number.

We have visited strangers who were willing to invest on the project.

'Several' is more than 'a few' in number but it is not as large as 'many'. For example, if we consider it as a number it is between 6 and 7. But remember, these numbers are just approximate to help you learn, and they are not exact. Another point to know is that 'several' does not refer to a specific number.

I have read books during the last year.

In this example, it means that the books were not a lot, maybe 3 to 15 books.

'Several' as a determiner is used before plural nouns. As a pronoun, several is used alone with no nouns immediately after it and as an adjective, it is used before nouns and it means 'separate*.'

I was waiting for him to show up days. → determiner

of his corrections related to grammar issues. → pronoun

As a phrase determiner, 'a number of' is used before plural countable nouns.

I made phone calls while having my lunch. → phrase determiner

When Using Pronouns and Noun phrases

us are not happy to be here.

the animals in the central zoo are not kept in a acceptable condition.

Can be immediately followed by a pronoun or a noun phrase as it includes the term 'of' in its own expression.

the politicians went on a protest to get their rights.

I have seen many creatures in the ocean, them were really odd ones.

As you know, both 'several' and 'a number of' are followed by plural nouns and as a result, they are used with plural verbs. The term 'several' can also be a pronoun, so, even if there is not any noun immediately after it, we are supposed to use a plural verb with it, because it refers to a small number.

My aunt has skills such as cooking, dancing, and drawing.

How They Can Be Synonyms

'A number of' and 'several' both mean not many so as a result we can consider them synonyms. However, they have some delicate differences that were discussed in the article.

immigrants are traveling to North America.

immigrants are travelling to North America.

Actually all and whole both refer to an entire group of people or things.

In this lesson, we will learn about the differences between 'none' and 'non.