What Do We Mean by Proper and Common Nouns?

Based on whether nouns refer to a general entity or a particular entity, they are categorized into two groups:

Common nouns are the generic name for a person, place, or thing in a class or group. In other words, common nouns are used to name general things rather than specific ones. A mug, table, sofa, TV, phone, wallet, key, etc. Every one of these items is named using common nouns. For example, the noun 'cat' is a common noun; but if your cat is called Marlo, the word Marlo is a proper noun.

A large number of nouns in the English language are common nouns. We can categorize them into different groups:

Now let us look at some examples from each category:

Usually, all the grammatical rules related to nouns are applied to common nouns, i.e. they can be plural or singular, they take a definite or indefinite article, they can be countable or uncountable. Proper nouns are the ones that are treated specially, for example, normally they do not have plural forms, they are always capitalized, they do not come with an article, they are not countable normally.

Common nouns are always written in small letters and they are not capitalized unless they come at the beginning of a sentence or in a title.

His ather is a hard-working man.

As you know, father is a common noun.

'Fathers' is a plural common noun, yet it is written with capital letter cause it is at the beginning of the sentence.

As opposed to common nouns which are generic, proper nouns are specific nouns usually referring to a unique thing or a unique group of things. We use proper nouns to name people, things, and places that are unique. 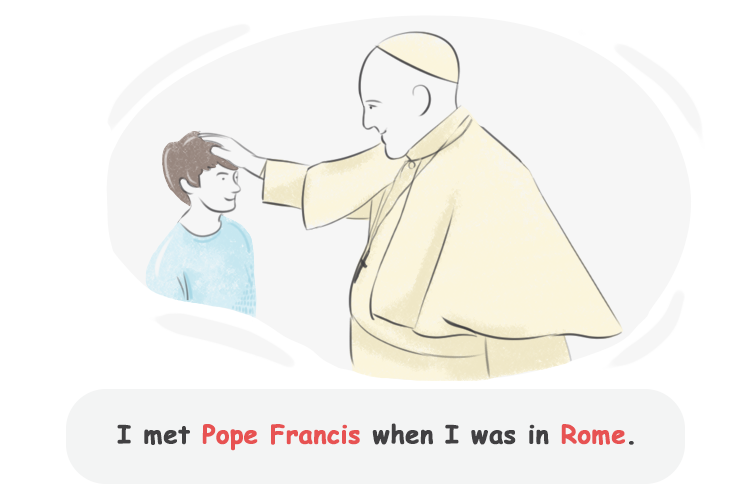 The First Letter of Proper Nouns Must Be Capitalized

Notice that the words 'street,' 'avenue,' 'parkway,' 'boulevard,' 'lane,' 'park,' and 'square' are also capitalized because they are parts of the proper noun.

Remember that a book or movie title may include other words, but not all of them are capitalized.

When we are trying to address people or things directly, we can use nominatives of address or in other words, nouns of direct address (technically called vocatives).

When we address or refer to people by their professional or official titles instead of their actual names, the titles or 'nouns of address' are considered proper nouns and consequently must be capitalized. However, they are common nouns in other circumstances. Take a look at the following examples:

Here 'Mr. Secretary' refers to a man who is the Secretary of State.

Here the noun 'Doctor' is a title used to refer to someone who is a doctor.

Who is the of this company?

The 'executive director' is the title of a job, but is not preceding a proper noun, so it's not capitalized.

I had a meeting with .

But here, 'Executive Director' is preceding a proper noun. Therefore, it is capitalized.

Have you met the ?

Here, the noun 'pope' is not preceding a proper noun (in this case a particular pope); as a result, it is not capitalized.

I met when I was in Rome.

But here, the noun 'Pope' is preceding a particular pope and is used as a title. Therefore, it is capitalized.

When we directly address or refer to a member of our family or relatives by their titles (dad, mom, sister, aunt, etc.) instead of their actual names, we use nouns that are common in other circumstances, but in this case, are considered proper nouns and must be capitalized. Let us see some examples:

'Mom' is used as a noun of address. As a result, it is capitalized.

Here, although the word 'mom' is referring to a particular mom, it is not capitalized since is not addressing a person (directly).

Here, 'Dad' is a proper noun because it functions as one and is a noun of address.

Here although the word 'dad' is referring to a particular 'dad,' but is still a common noun and is not used as a noun of address. Therefore, it is not capitalized.

'Appellations' are names or titles (common nouns) that we can add to people's names. In this case, an appellation is considered a part of the proper noun they are added to. Therefore, we need to capitalize them. Let us see how it works:

Charles is the heir to the British throne.

The word 'prince' is a common noun that is used as a title before a proper noun. Therefore, it is capitalized.

The word 'princess' is a common noun that is used as a title before a proper noun. Therefore, it is capitalized.

We consider commercial 'brands' as proper nouns. Although the object we refer to by a brand name may not be unique, the brand it belongs to is. Let us see some examples:

Here 'MacBook' is the name of a laptop made by Apple.

Here 'Porsche' is a brand of car.

In this sentence, 'Pepsi' and 'Coke' are cola brands.

We do not capitalize cardinal directions unless we use them immediately before names of regions.

Have you been to the west of ?

Here, the word 'west' is not immediately preceding the proper noun 'Canada,' so it is not capitalized.

Have you been to the ?

Here, 'West' is immediately preceding the word 'Coast,' therefore it is capitalized.

The first letter of the days of the week and the names of the month are written with the capital letter.

I was born in une.

My favorite day of the week is unday.

We must always capitalize proper nouns whether they are at the beginning of a sentence or in the middle of one. Proper Nouns include at least one word and in some cases, more than one word. If they include more than one word, we capitalize all of them. When certain words referring to specific places or regions (such as street, road, avenue, square, boulevard, lane, parkway, park, river, ocean, sea, lake, canals, etc.) precede proper nouns, we capitalize them.

'Proper adjectives' are formed from certain proper nouns (names of people and places including continents, countries, cities, etc.) and like proper nouns, they must be capitalized.

Do you prefer Italian food or food?

The words 'Italian' and 'Chinese' are both proper adjectives and respectively made from the proper nouns 'Italy' and 'China.'

I married an woman.

Here 'African' is a proper adjective and comes from the proper noun 'Africa.'

Proper Nouns with and without 'The' (definite article)

We do not normally use the definite article 'the' with proper nouns unless it is part of the proper noun referring to a particular place or organization (like companies, hotels, museums, etc.). The definite article 'the' also precedes countries with 'States,' 'Kingdom,' or 'Republic' in their names, names of canals, rivers, seas, and oceans: plural names of people and places, and names made with 'of.' Let us see some examples:

'Jenifer' is a proper noun, so 'the' can't precede it.

is an American entertainment conglomerate.

Here, you can see the name of a company without 'the.'

Here, you can see a name of a company with 'the.'

There are two kinds of nouns in English based on whether they refer to a generic noun or not.
Here are the tips on the table below.

Nouns are among the first lessons when studying a new language. In other words, we have to be able to name things first, then make sentences with them.