"Past Continuous" Tense in English Grammar

The past continuous tense is used quite often in English, so let’s understand exactly when to use it and how to use it. Are you ready? Let's begin. 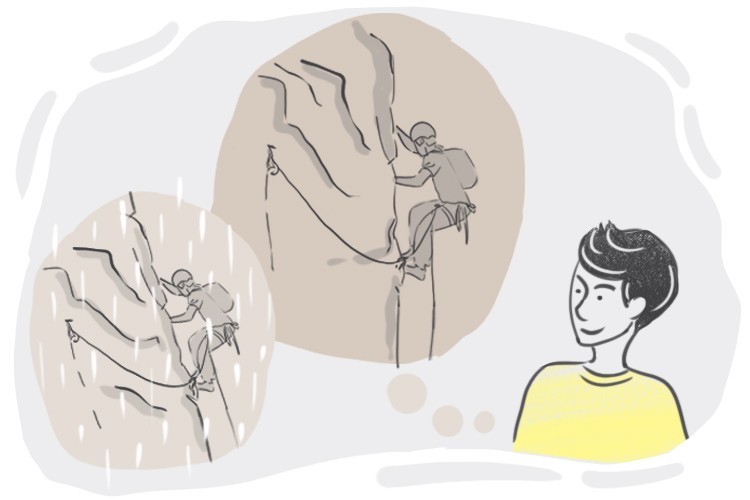 What Is Past Continuous Tense?

The past continuous (also called the past progressive) is a grammatical tense used in English that describes actions or events in a time before now, which began in the past and were still going on when another event occurred.

The past continuous is made from the past tense of the verb 'be' and the -ing form of a verb:

Look at some examples:

I in the garden.

For negative sentences we put 'not' before the auxiliary verb 'to be.'

You can contract the conjugated forms of 'be' (was, were) in the negative form.

They were sleeping. → They sleeping.

Here, you can see the process of negations and contraction.

Just like we made the question with 'be' in the present simple, here we also put 'was' or 'were,' before the subject to make a 'yes/no question':

He working. → he working?

For 'wh- questions,' we just put the question word at the beginning, then make the yes/no question.

He working in the morning. → he working?

We were meeting them. → we meeting?

If you want to learn more about spelling rules of adding -ing to the base form of verbs, see here. 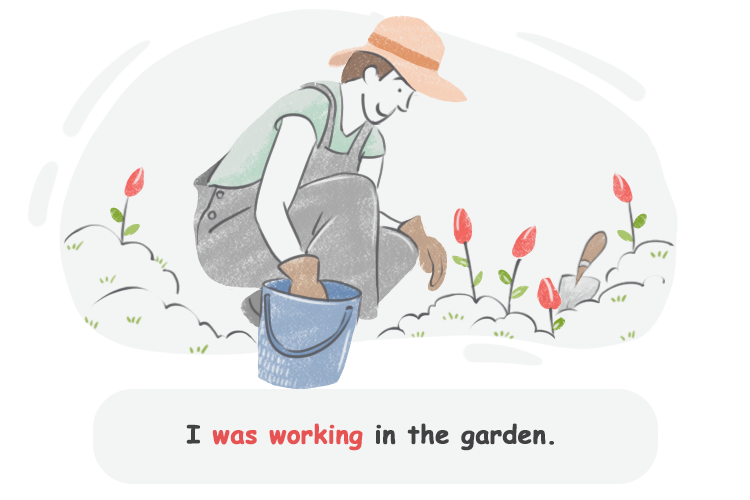 Using Past Continuous to Talk about Ongoing Actions in the Past

When someone uses the past continuous, they are thinking about:

Ongoing Actions in the Past

We use the past continuous tense to talk about an action that was ongoing in the past. As you can guess from the name, this tense talks about a past action. the important thing to know is that the action we are talking about was ongoing back then. Check out these examples:

I in the garden.

Here, we are referring to an action that was in process in the past.

The children their homework.

I a nightmare when the phone rang.

We dinner when he burst into the room.

We use the past continuous tense to talk about an action that happened before and after a specific time. Look at the examples:

It was eight o'clock. I a movie.

She when I called her.

We use the past continuous tense to talk about two actions that both were happening at the same time. It means that both actions were taking place at the moment, and they were both in progress. Here are the examples:

While I the dishes, Mike on the phone.

I while he dinner.

Frequent Actions in the Past

I every day, three times a day.

Here, we are referring to a routine that tended to repeat itself.

They behind our backs all this time.

We use the past continuous tense with always, forever, constantly to talk about something which happened, again and again, emphasizing a continuing series of repeated actions. For example:

They always over trivial matters.

We constantly to buy a house.

We use the past continuous tense to talk about something which was changing, growing, or developing. This means that it was increasing or turning to another grade or basis, little by little, over time. Check out these examples:

My kids up quickly.

We can also use the past continuous tense to refer to the present or future in hypotheses. This means that we are not talking about something that is probable to happen. It is actually something that would happen if something else was in progress. For example:

If I a child, I would raise him in a village.

We can also use the past continuous tense after words like 'wish.' This structure is used to indicate that there is not a suitable situation for you, but you wish it was different. For example:

I'm tired of this small house. I wish we in a big house.

I we a trip as they are.

The other day I for a bus when I saw Peter.

Here, we are narrating a past situation that we were in.

The sun and the it when our guest arrived at our place.

We use the past continuous tense with the main verbs 'wonder,' 'think,' or 'hope' to make a polite request. For example:

Excuse me, I if you could open the door.

I if you could tell me where I can find a post office.

When Not to Use Past Continuous Tense

We do not normally use the continuous tense with stative verbs (also called non-continuous verbs). These verbs are normally used in the simple form because they refer to states, rather than actions or progress. Some examples of these verbs are to have, to know, to want, to cost. Look at the examples:

When I came home from the gym, I really needed (Not ) food!

Past continuous tense is used in English to talk about progressive past actions.

When to Use Past Continuous Tense

Past simple tense is one of the most exciting and important tenses in English. We often use it to talk about what happened before.

The best way to predict the future is to create it. In this lesson, you will learn to talk about the future in English using 'will.'

The present continuous tense is a basic tense. It is usually one of the first tenses you start to learn when you first start studying English.

The future continuous tense is used by native English speakers quite often and this is your chance to learn and understand this tense so you can start using it.

Present perfect is a useful tense that talks about an action that happened in an indefinite time in the past. In this lesson, we will learn more about them.

The present perfect continuous tense is a useful tense in English grammar. Why? Because it connects the present and the past. Let's see how.