'They' and 'them' are both refer to a group of people, but they function differently in a sentence because they take different grammatical roles. 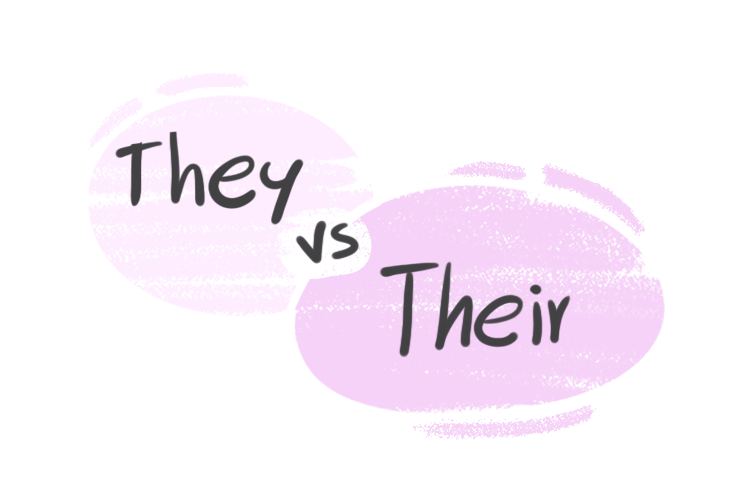 'They' and 'them' are both third-person plural personal pronouns. But one of them is a subject pronoun and the other is considered a determiner.

'They' is a third-person subject pronoun. 'They' refers to a group of people, animals, or things.

are our guests for this weekend.

Here, 'they' refers to a group of people.

can kill a giraffe if attack together.

Here, 'they' refers to a group of animals, for example a pride of lionesses.

Instead of using 'he' or 'she', we can use 'they' to refer to a person whose sex is not mentioned or is unknown. This is called the 'singular they'.
Many non-binary people prefer to be called by the pronoun 'they', rather than 'he' or 'she'.

needs to know are appreciated.

'Everyone' does not specify if we're referring to men or women. Therefore, we use 'they' to include both of them equally.

loves to travel around the world. prefer to travel by train.

Although, Elise is one person, but we used 'they' to be neutral about the gender of our subject.

We can use 'they' to refer to people in general, especially when we want to say a general idea or a famous saying.

You know what say , money solves everything.

say a widespread disease will soon kill thousands of people.

'Their' is the possessive form of 'they'. We use 'their' to express that something belongs or relates to the group of people, animals, or things.

Kevin and Paula are going to name baby 'Alice'.

house was so big and luxurious.

We can also use 'their' instead of 'his' or 'her' to show that something belongs or relates to a person without specifically and explicitly saying whether that person is a man or a woman.

Every boxer should compete according to own weight.

In many countries, they still eat all meals with family members.

Singular They: Is or Are

'Singular they' is a relatively new personal pronoun that has been introduced in modern English. It's singular, but are we suppose to use singular verbs or not?

'They' and 'them' are both third-person plural pronouns and refer to plural nouns. But what is their main difference? Let's find out!

They, Singular or Plural

Is 'They' a singular or a plural pronoun? The answer to this question used to be so easy. We would've said yes. But it's more complicated than that.

They vs. These or Those

'These' and 'Those' are called plural demonstratives. We use them as determiners and pronouns. But are they interchangeable with the plural pronoun 'they'?

'This' and 'that' are singular demonstratives. 'This' is used to point to a noun being close to us and 'that' is used to refer to something far from us.

'This' and 'these' are both demonstratives. They point to a specific noun in a sentence. Here we will briefly look at their similarities and differences.