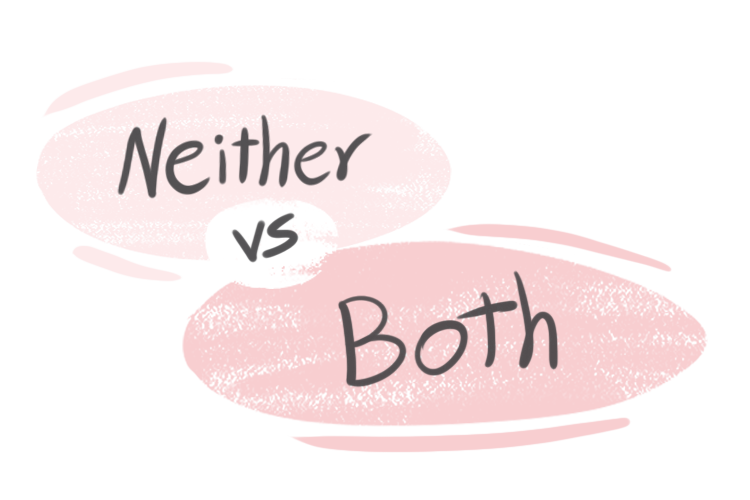 'Neither' and 'both' can be different in many cases. One is their meaning. As you know 'neither' means none of the two unlike 'both' which refers to two out of the two. Another field that makes them different is using the suitable verb after them that we will discuss in detail in this article.

refers to singular nouns so, it is used only with singular verbs.

tradition of marriage is meaningful in our country.

refers to two nouns at the same time so, it is used with plural verbs.

The Grammatical Rules of Using Plural or Singular Nouns

student is smart enough to answer the question.

the students listens to the teacher.

the dogs were having fun.

dogs were having fun.

Neither as an Alternative

conveys a negative meaning, which makes it a good alternative for 'both' in negative statements. Although it has a similar meaning to 'both', it can also be different in meaning. So, be careful with its meaning.

topic was to eliminate hunger in this world. (Not either of them.)

is beautiful. (Not either of them.)

I am going to assemble a model of spacecraft.

In this example, the noun after both is plural the plural form of 'spacecraft' is also 'spacecraft'.

'Neither' is used before a singular countable noun to define them as a determiner. As a pronoun, it is used alone with no nouns after it and it comes directly before the verb. As an adverb, it is used to agree on a negative statement. 'Neither' as a conjunction is usually followed by nor and is used to connect two clauses.

probed the man's mind to see if he was innocent. → pronoun

I didn't pay for the rent did my husband. → adverb

the lawyer nor the judge believed him to be innocent. → conjunction

The Verb with Neither and Nor

Whenever neither is used in combination with nor the verb usually agree with the second noun ( the noun after nor). Look at the examples to be more clarifies.

the boss the employees are going out for lunch.

her mom her __sister believes her words.

is mostly used as a pronoun and a determiner. As a determiner, it is used before plural countable nouns or in some cases before singular nouns and as you know, it is considered a pronoun that can be used immediately before verbs.

boys were playing with their bikes. → determiner

I didn't see the pens, were hidden under the desk. → pronoun

Both with Singular Nouns

Sometimes, a singular noun is used after 'both' but you must link the noun to another singular noun by using the linking word 'and'

Both the cat the dog are cute animals.

Both my friend my mom are waiting for the bus.

Both 'neither' and 'both' refer to two options. When using 'neither' we mean none of them or not even one of them. By using 'both' we mean two out of the two.

teachers were talking on the same subjects.

Verbs That Are Used with Neither and Both

'Neither' and 'both' are used with affirmative verbs. However, neither imply a negative meaning as it is a negative marker. While 'both' implies a positive meaning.

of the houses is big enough for three of us. (Implies a negative meaning)

houses are big enough for three of us. (Implies an affirmative meaning)