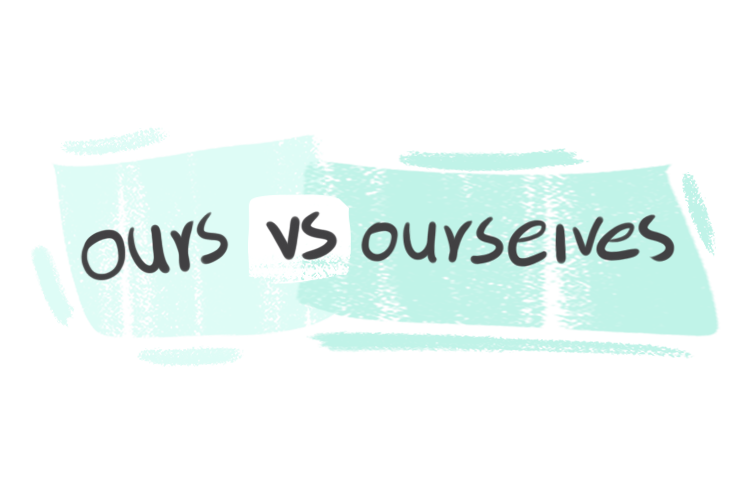 When you use 'ours' you refer to something that belongs to both yourself and to one or more other people. It is called a possessive pronoun. Possessive pronouns are used when we want to show who owns or is associated with a thing.

'Ours' is a possessive pronoun replacing the phrase 'our magazines' to avoid repetition.

'Ourselves' is the first-person plural reflexive pronoun. When you use 'ourselves', you refer to yourself and one or more other people as a group.

We really enjoyed on our trip to Hawaii.

When the subject and object of the verb refer to the same group of people, we use 'ourselves' as the object of a verb or preposition.

If couldn't calm down soon, there would've been a disaster.

Sometimes, we use 'ourselves' to emphasize the first-person plural subject.

We will finish it.

Here, 'ourselves' is an intensifier, emphasizing the subject 'we'.

'Ourselves' instead of 'Us'

Sometimes, for emphasis, you can use 'ourselves' instead of 'us' as the object of a verb or preposition. It is considered more formal and somehow not used often in spoken English.

People like should be brave warriors, not some coward nobodys.

The more accurate and acceptable sentence would be 'He is a friend of us'.

We can use 'ourselves' after the linking verbs like 'be, seem, appear, etc. to mean our real or normal selves. In this way, 'our' acts as a determiner and 'selves' as a noun, so they can be separated by other words.

We are when we are united.

We are not true when we are apart.

Though it is not considered standard English, we can use 'ourselves' instead of 'we' or 'us' in compound noun phrases.

Other students and must state our complaints.

What is the difference between 'ours' and 'us'? They are both pronouns. They are both first-person plurals. But they are of different categories of pronouns.

We have different kinds of pronouns in English grammar, for example, subject, object, possessive, impersonal, etc. Here, we will discuss two masculine pronouns.

'Ours' and 'Theirs' are both what we call possessive pronouns. They are used to refer to something or someone belonging to or associated with us or others.

Mine, Pronoun or Adjective?

In this part, we will discuss the word 'mine' in the English language. We'll see its part of speech, uses, and functions in a sentence.