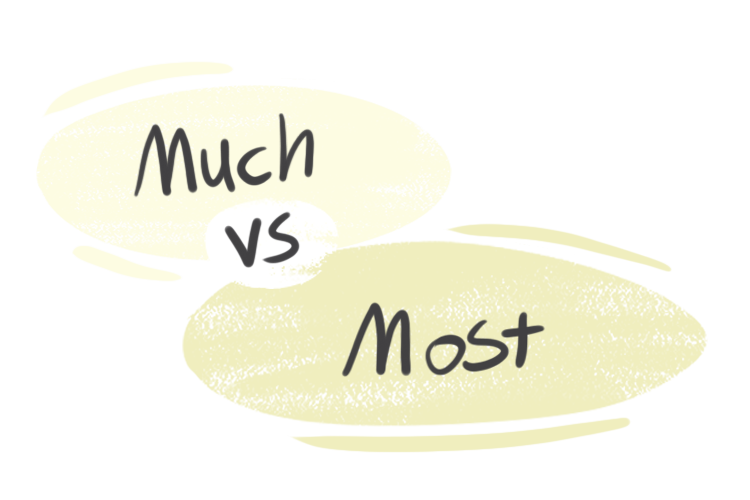 'Much' means a large amount, while 'most' means the largest amount in comparison with other things.

Much and Most and Their Definitions

Whenever we use the term 'much' before a noun or any word class that we are allowed to use, we are referring to an unknown amount that is large.

We haven't talked , but he seems to be interested.

means the largest amount; however, as a determiner or pronoun it can mean the majority.

The important to do is to get rid of the shoes that you were wearing the night of the murder.

girls are into tall boys.

We are only allowed to use uncountable nouns after much, so, as a result, the noun after it must be singular. Since we use a singular noun the verb of the sentence must be a singular verb.

Doing homework made him feel sick.

There was cream on the cake that I could barely see the cake it self.

meat of the cow was given to the poor.

Make the Most of Something

To make the most of something means to take full advantage of it. Look at the examples.

She him forgetting to check the cameras and won the argument.

You your cold, now, it is time to study.

Most or the Most

Using 'most' alone before nouns means the majority, we mean the largest part in a set of more than one person or thing. 'The most' is used alone or before some adjectives and it makes superlative adjectives.

I found students being bored at the end of the class.

This bed is comfortable bed I have ever had.

at Most or at the Most

This idiom means that the pointed amount is being considered the largest amount or number.

They will fix the car in three or two days.

of his worries are because of her little daughter. → pronoun

We didn't have time together. → determiner

Most of and Much of

Do not use 'most of' and 'much of' before nouns alone. These phrases are used before noun phrases.

I have spent my money on her birthday .

the baby's food is left on the table.

Much vs. A Lot

These two words are a little bit similar in meaning, but with a little effort, you will get the differences.

Another vs. Any Other