"Much" vs. "a Lot" in the English Grammar

Much vs. a Lot 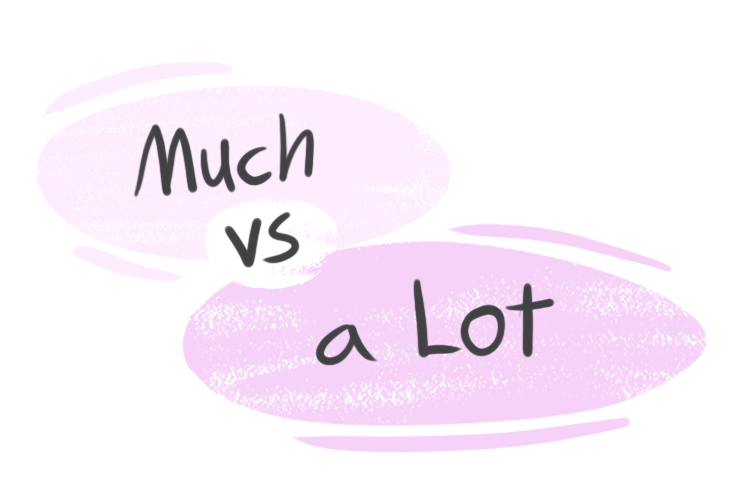 'Much' is used mainly in negative and interrogative sentences unless we are talking formally.
'A lot' can be used in informal affirmative sentences as an alternative for 'much'.

Types of Sentences Which They Are Used in

is mostly used in negative and interrogative sentences in informal situations. Whenever we use much in an affirmative sentence it sounds a little formal to the audience.

He does have money which makes it difficult for him to live abroad.

They have friends. (Formal)

They have friends. (Informal)

This is money. I don’t know how to spend it.

He did not have faith on her.

is followed by both singular uncountable and plural countable nouns. So, it is obvious that we can use or with either singular or plural verb.

Our son has smart ideas on this subject. I am proud of him.

Determiners are used before the nouns to define them. As a determiner, 'much' is used before uncountable singular nouns. As a pronoun, much is used alone with no nouns following it. As you know, adverbs can come before adjectives and other adverbs, so, 'much' as a determiner is used before adverbs and adjectives. As you can see 'a lot' is formed by two words, one is the 'article' a and one is the 'noun' lot. But as a phrase, they are used as determiners before plural countable and singular uncountable nouns, in this case, 'a lot' is followed by the term 'of'. Sometimes, this phrase is used alone as a phrasal pronoun.

It takes patience to have an orange tree. → determiner

people are going to this big ceremony of the country. → determiner

Aurora used to be over-weight back then. → adverb

My daughter does yoga . → adverb

My daughter does yoga too . → adverb

refer to a large amount. By quantity, we mean an amount or a number. So, these two words are being considered as quantifiers.

us are allowed to choose an optional course.

They couldn't find milk, so they used butter instead.

'Less' and 'least' are used a lot in English so it is important to know their differences.

These two words are a little bit similar in meaning, but with a little effort, you will get the differences.