"Neither" vs. "None" in the English Grammar 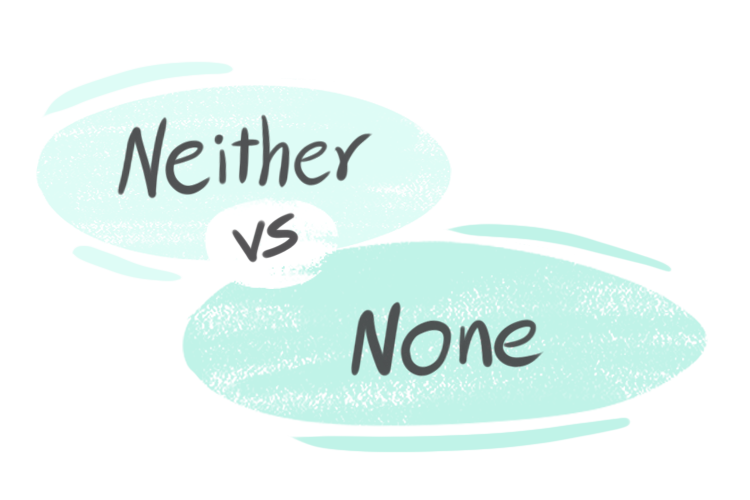 The main difference between these two terms is their meanings. 'Neither' refers to not one out of the two in a group, while 'none' refers to not even one in a group of more than two things.

means not one of the two options. In fact, 'neither' has different meanings and it can be used in different situations, because it has different grammatical functions, but in general, the meaning is none out of a group of two.

of them knew the answer. Neither Pam nor Jake.

of his friends knew Sara. She was a total stranger.

"What would you have, a bowl of soup, French fries, or steaks?" " are my favorites; I would like to have some salad."

Are They Used With Singular or Plural Verbs?

(as the subject) is always used with a singular verb. However, sometimes in everyday English, you might hear 'neither' used with plural verbs, but it is technically wrong and the correct form is to use a singular verb with 'neither.'

woman is accustomed to being kept waiting.

'Neither' as a determiner is used before singular countable nouns to define them. As a pronoun, it is used alone with no nouns after it, so it is used directly before the verb. 'Neither' as an adverb is used in sentences to agree with a negative statement; however, it is used with affirmative verbs, but it is a negative marker by itself. As a conjunction, it is usually followed by 'nor' and it is used to connect two clauses.

theory is too difficult for the average person to understand. → determiner

of the enormous crabs moved across the ocean floor in search of food. → pronoun

I didn't see a knight in the movie. did Alan. → adverb

The sun cannot be vanished behind the clouds in California in Arizona. → conjunction

As you know, pronouns are used alone before verbs. It means they are not followed by any nouns. Since 'none' is used as a pronoun, it is not followed directly by nouns.

could predict the winner of the Superbowl.

None was left in the pizza box.

With the pronoun, 'none,' we are allowed to use both singular or plural nouns but keep in mind that using a singular verb is more formal and safer to use in writings. Remember using the plural form of the verb which is by the way an informal way of talking is more common to be used in American English.

of us was waiting for John to arrive except Rachel.

Neither of and None of

As it was discussed pronouns cannot be used before nouns, so what if we want to use them before nouns, noun phrases, or pronouns? here is the tip; add the term 'of' to them so that they can be added to words other than verbs.

is used before pronouns and noun phrases.

is used before pronouns, noun phrases, and nouns (without determiner).

them accept their mistakes.

the teachers are expert enough.

'None' cannot be followed immediately by a noun.

the shirts are fit. (Not "None of the shirts fit.")

What about Negative Verbs?

They didn't find villains who could be capable of killing the innocent child.

Use 'either' instead of 'neither' in negative sentences. The rules are the same. We use singular countable nouns after 'either' and it is followed by a singular verb in standard English.

I couldn't choose between cat.