'Verb' originally meant 'word' in archaic languages. In the world of grammar, verbs are the second most populated country after nouns. Start your journey! 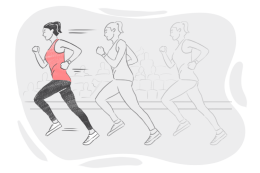 Verbs are one of the most necessary elements to make a sentence. In fact, without a verb, we cannot have a meaningful sentence.

Based on how we conjugate verbs in the past simple and the past participle, they can be divided into two types: Regular verbs and Irregular verbs.

'She smiled beautifully'. 'She started a rumor'. One of these sentences has an intransitive verb and one has a transitive one. Want to know the difference?

Ergative verbs are a type of verbs that can be both transitive and intransitive. In this lesson, we will learn more about this type of verbs.

There are five basic types of verbs: intransitive, linking, mono-transitive, di-transitive and complex-transitive verbs. In this lesson, we'll discuss the last.

Linking verbs are connectors of the language. Their only job is to link a subject with a subject complement. Want to know how?

Have you ever repeated a word too much that made you think How boring it got! You can use dummy verbs instead of repeated verbs.

English has changed over time. Many words have changed their forms and pronunciations. In this lesson, we will cover the verbs that were changed.

Some verbs change their forms based on the person and tenses. In this lesson, you will learn more about these verbs.

What Are Verbs and Voices?